Well as I promised last post, I thought a may try and print up some Epic 40k minis for my Imperial Guard Steel Legion.  I have been hunting for Valkyries to cart around some stormtroopers for months and I am not happy with the prices of the forge world Aeronautica versions that do pop up from time to time.  I had been searching through Thingiverse a few times and stumbled onto some really nice looking sculpts for Valkyries (airborne transport).  I thought now was a good enough time to try printing some tests of quality.

I had purchased my AnyCubic Photon S last year with the intention of using it for this kinda task specifically.  I knew there were plenty of designs out on the net for the purpose when I made my purchase.  I would say that settling on the Photo was in direct connection to the availability of nice looking sculpts.

This test was to check not only on acceptable quality – but also paintability as well.  My army needed four Valkyries to have a good mobile force of stormtroopers to quickly try and claim objectives.  I didn’t want to spend 28mm (inflated forge world prices) for 6mm figures lol. 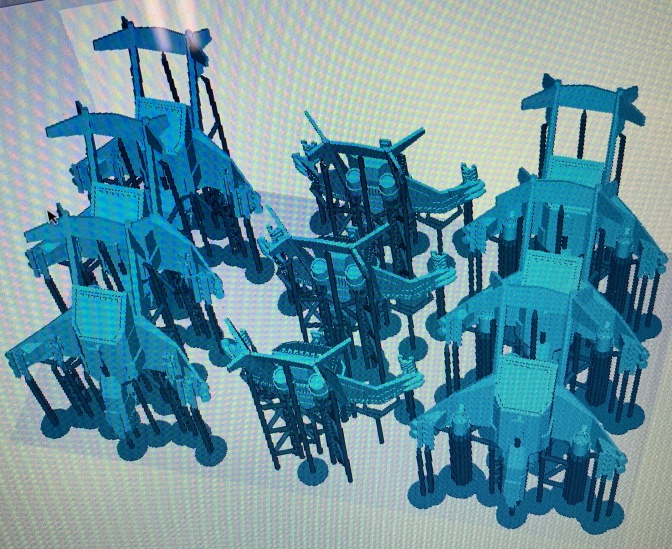 I took this shot of my first try at a batch of Valkyries – 9 of them in this shot.  This is a resin printer – so more models doesn’t take any longer than one – the total layers really determines the time it will take to print… so 9 will print just as quickly as 1.  The first test took 3 hours to print… and it was a failure.  My exposure time was to low and I needed to add a few more supports to a few areas on each Valkyrie.  So I made some slight adjustments – resizing the entire figure to around ~35mm in length – after comparing the size to some Vultures I had (metal GW OP minis) – (probably about 70% of the original STL size).  I adjusted the supports and gave a bit more room between each print – so I could spot the trouble spots easier.  I settled on printing 4 this time around. 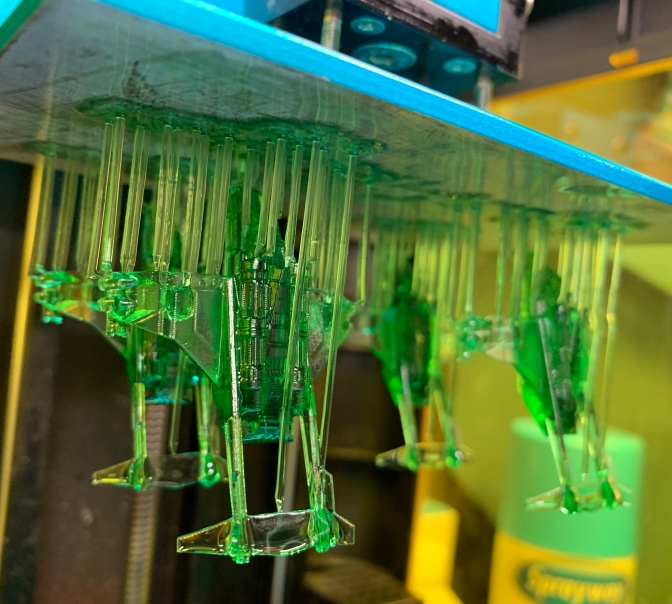 The second print took around 3 hours or very close to the same time as the first test.  And it was a success.  It appears that my exposure times were very close to optimal – an dI only had a couple misplaced supports. 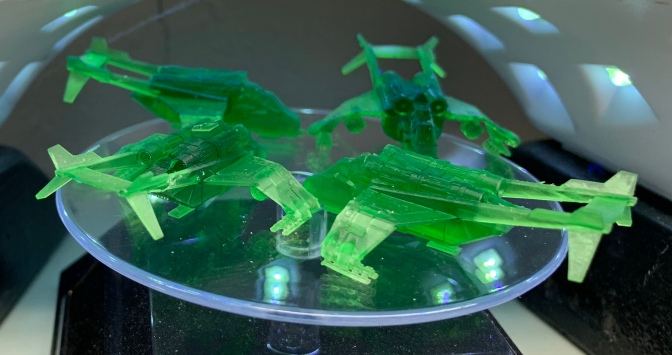 I carefully removed the prints from the build plate and gave them the customary bath in 99% Isopropyl alcohol (IPA)… after removing the supports and giving each print a good quality check I set them under the UV lamps to cure.  All in all I left them to spin under the lights for maybe 10 minutes… adjusting their position a couple times in that time.

The detail was the best I had printed thus far with this printer.  Part of that is the sculpt of course … but I think after 8-9 months or so I have started to turn the corner on getting things dialed in with the settings and support placement. 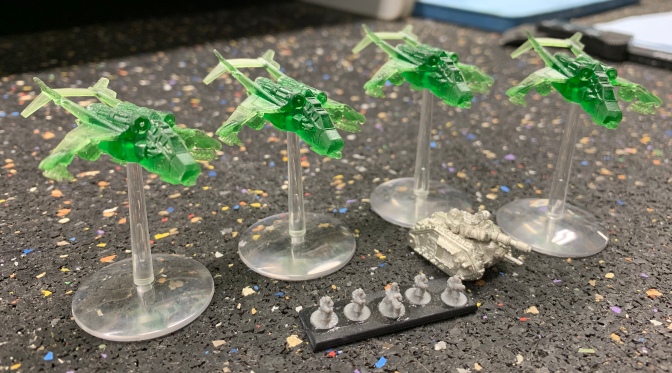 After everything was dry and cured I drilled some holes for the flying stand on each… and checked the look for scale next to a troop stand and a IG tank.  I think these look great…. I have to say I was actually kinda surprised as to how good these looked at this point.  Aside from a couple basic support errors – bad placement – MY ERROR… these were kinda perfect.  But I still needed to get paint on them to really be sure. 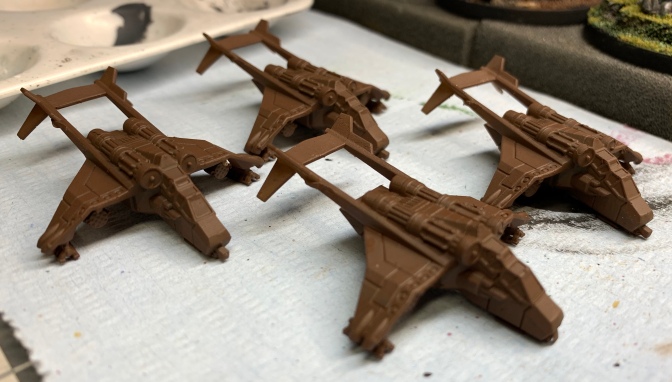 I settled on a basic brown primer… and gave them 2 light coats from the airbrush.  The paint seemed to cover well – and adhere to the resin without issue.  I was sure to give these a good bath after I drilled them for the flight stands – just in case.  After the primer was dry I gave them a nice heavy brush with a dark brown wash to pop out all the details.  I then left these to dry overnight.

The next morning I did a few rounds of assembly light painting on the Valkyries.  I pulled out all the metallic areas – then added highlights to the browns and added some green to the windows.  After all that was dry I added a nice black wash to dirty it all up and create some depth.  When the black wash dried I went back and added some dry brushing to the brown and another highlight of silver to the metal bits to help it all pop. 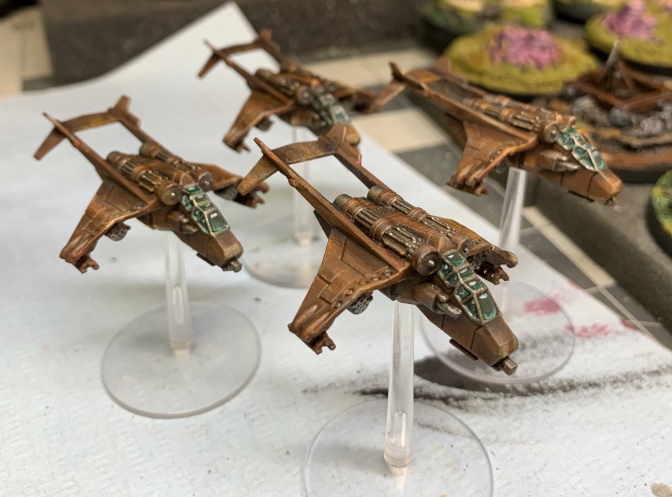 I went in and added some highlights to the windows and touched up anything else I may have missed before adding some quick powder weathering effects.  And lastly a final big of dark washes to help force the contrasts here and there.  The painting went really easy on these… I was pretty pleased to be sure. 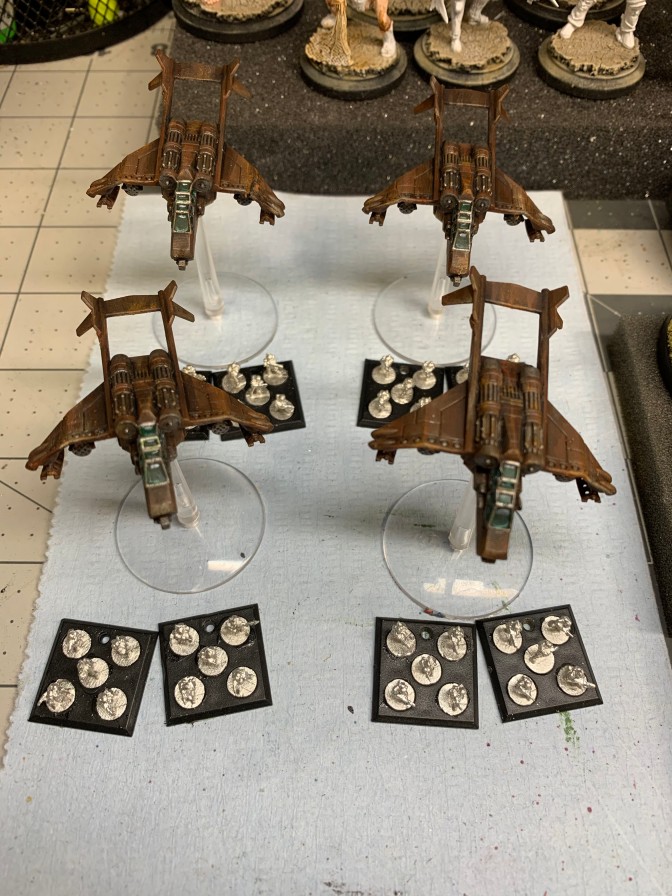 All in all I would say that printing my own Epic army minis was successful – and I am pretty confident I will not be needing to hunt down old mini’s on eBay to fill in gaps in my armies from now on in the epic scale at least.  This final shot shows the stormtroopers (forum-ware) I will be using with this unit… I think the scale comparison is about right.  Damn – I am pretty happy about how this turned out.  It has me psyched to get the entire army finished for play lol.