Wow, I didn’t mean to go silent for the last few weeks, but life happens.  Right after my last blog post I had an electrical problem in the yurt that took me a couple days to straighten out.  Then the other week was my birthday weekend… so I spent much of that weekend with family and friends just goofing off.  I did get a few things done on the hobby space rebuild – but nothing major at that time.  The last two weekends I did get more overall progress on the room as things got back to normal.

First off was a strange electrical “brown out” that led the a full on “Black Out” of the electrical in the yurt.  All going on while we had our coldest days/nights of the current winter.  So we ended up having to sleep in our old room in the house.  Luckily I traced the problem in the daylight – and got lucky with a local company which rebuilds and sells discontinued breakers.

The problem started after I had already left for work – my wife noticed that part of the power seemed to be flickering – and going out in part of the yurt.  But other parts were fine.  Then she noticed that other parts were “dimming” or browning out.  She sent me a message at work to let me know about the problem… so I could get home after work and try to figure it out.

Of course it was dark / near dark when I got home – and I had a hard time tracing the problem in the dark.  I did decide through several trials and logic traces of the wiring (I had wired the yurt myself years ago – so I knew for sure what was on what circuit – and how things ran).  I decided that the main panel in the yurt and the power issues in the yurt were not WITHIN the yurt.  No burnt out wires… no anything after resetting the main… etc.  I traced all the plugs and only found a possible issue with the wall heater in the bathroom.  I wouldn’t know for sure because the yurt main breaker wasn’t flipped.  Meaning it didn’t detect a fault or blow a fuse.  I traced the issue out to the box that was giving the yurt its power. 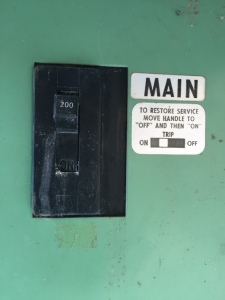 Outside by the old house… the big box has 2 little boxes pulled off of it for the 60 amp line going to the yurt.  the first box (backtracking from the yurt) was ok … newer box with main breaker we installed when we built the yurt.  The breaker in this box was not tripped.  I flipped it off and on and encountered no issue.  I then traced back to the next box in line – a box which split power to the yurt box as well as other property needs (? I still am unsure where it goes lol).  Anyhow, this breaker and box are older.  This breaker was not tripped… or so I thought.  It wasn’t in the OFF position – but it wasn’t in the ON position either.  It was stuck between … midway.  This wasn’t right… so I flipped this breaker ON and OFF multiple times … and it wouldn’t stay in either position. 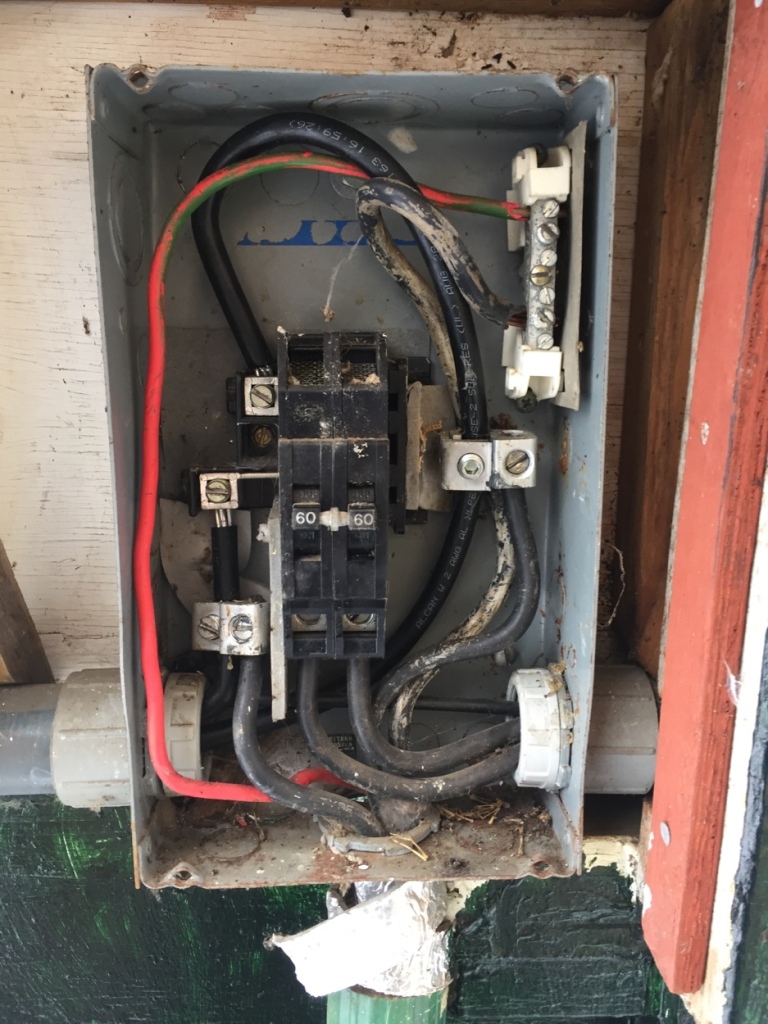 Next I went to the main box before this box… and shut off the power leading to the other boxes (to the yurt specifically).  I pulled the panel and took a look at the not working breaker in the second box.  and pulled the breaker – unhooking the 60a service wires the size of my pinky lol.  This kinda thing bugs me… as this power would likely stop my heart and fry me good if I was neglectful with it.

I got the breaker pulled… and I market where the wires went with colored electrical tape to help me remember how things go back together.  I worked the breaker back and forth and finally got it to stay OFF or ON.  But I wasn’t feeling great about the condition of this breaker.  I set out to find a new one.  And just for kicks… mother nature has put a nice layer of ice and snow on the roads for me to trek out and across down (multiple times) in.  JOY!… but I had the subaru with studded tires on… so I felt good.

After going to one electrical shop I discovered that the breaker I needed wasn’t manufactured anymore.  In fact getting one would cost more than getting a new box and breaker package lol.  I wasn’t sure I wanted to get into rewiring the entire box and breakers in a snow and ice storm.  I really just wanted a breaker.

The helpful guy at the counter told me that there was a place in town that rebuilt and refurbished old discontinued breakers… ( https://oregonbreakers.com ).  They recycle and rebuild breakers – as well as sell all kinds of electrical stuff.  I talked to the sales person on the phone – and she had me text her photos of the breaker I needed.  And within a few minutes I had a refurbished breaker holding at their will-call desk for me.  I crossed town again – and these folks were excellent and very knowledgeable.  I got to talk to the head shop guy and he answered all of my questions and concerns about the breaker and box situation.  I left feeling very confident about the new breaker – and with plans for upgrades to the electrical box situation outside for later this summer.

I got home with the new breaker and popped it in… hooked up the wires (*remembered to shut off the main power box) and then turned it all back on – everything was back to normal.  ALMOST…  I found out that the wall heater in the yurt bathroom was still not working right.  It heated but the fan wasn’t working.  I decided to simply shut this breaker off in the yurt so the wall heater couldn’t be used.  If anything was overdrawing… it could have been this wall heater.  With the new Mini-Split we installed we don’t have any real use for this wall heater anymore.  Later this year I will pull the heater out and think of a replacement (maybe a radiant heater / towel rack?).

With all that stuff behind me… birthday (now technically OVER 50), and electrical trials … I got some more work done in the hobby room.  Here are some photos of how things stand as of the last couple days.  I will plan a full review and write up of the room when I am done with the project – hopefully in another month. 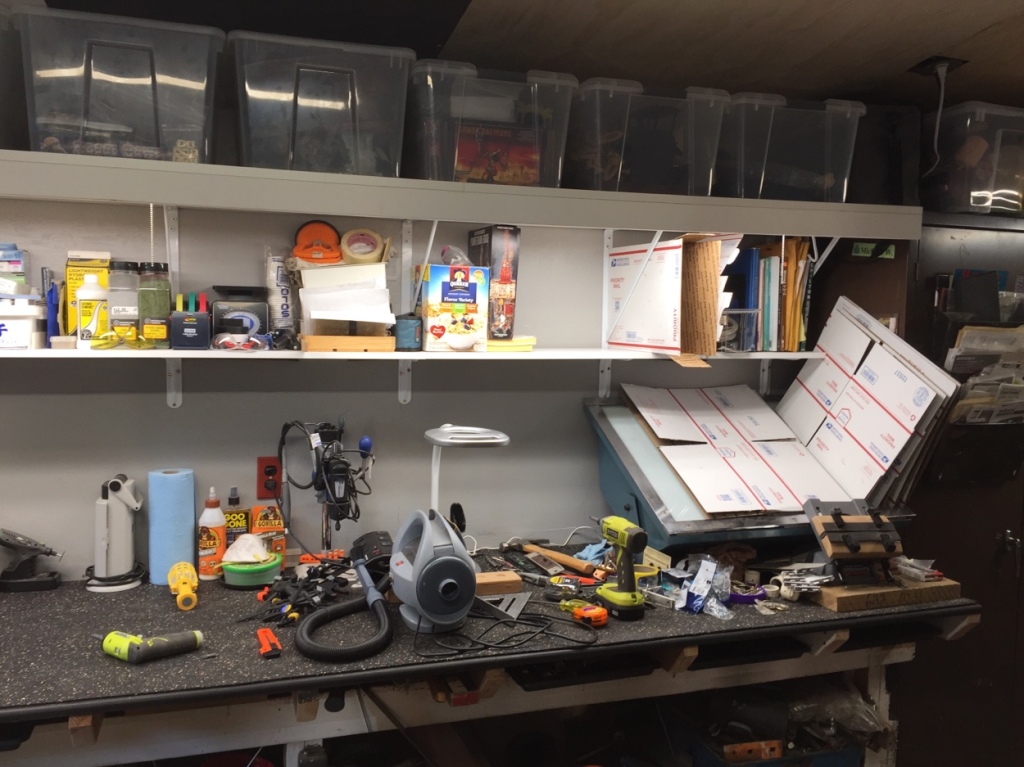 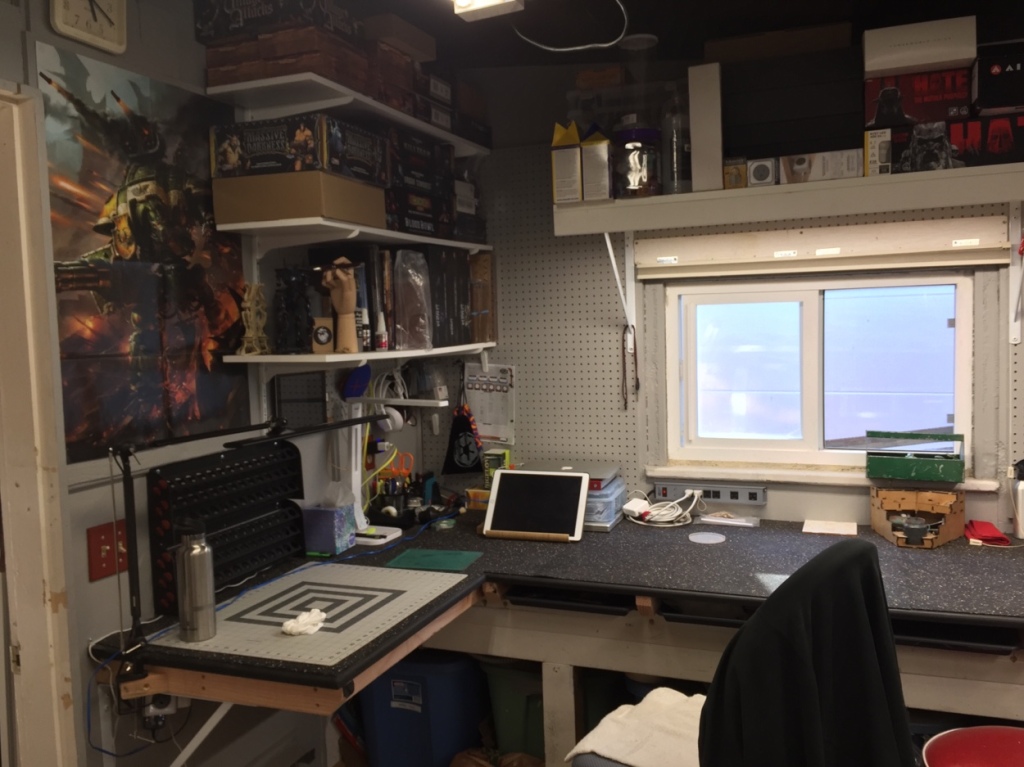 Things have come together pretty well really.  I have most of the shelving up… and lighting and things moved about the room for new locations.  Things are getting closer to where I want them.  Right now my biggest issue is moving item A so I can move item B so I can get item C moved to where I want it to be.  Rinse and repeat… lol.  But I did get to a place where on is past sunday I was opening boxes and putting things away in the new space… which was a nice change.  I really need a few weeks to just clean up and put things away I think.  That and sort through old stuff for getting rid of.  I also spent a good part of the past week putting stuff up on eBay.  Mostly board game stuff for now…. but soon some older miniatures and things as well.  I have started my selling to fund my planned new 3D printer… hopefully in a month or so I will have the money raised to do it.