I’m currently on a Yurt focused — gaming hiatus. What this means exactly is I am not going to any game nights or playing in any leagues or organized play. I have not been starting any major hobby projects either. Things dealing with the normal home/family life is changing – and to better be ready for the options we have put a major push to being back into the yurt before years end. Thus I have been slowly and steadily checking off projects in the path to getting the yurt done (finally).

The Yurt has always been the plan to live in full time. Over the last few years we have not been living in the yurt. Instead we have been occupying the old doublewide manufactured home which was my father-in-law’s home. We had initially built the yurt to live in while we took care of his needs around the place. We didn’t want anything permanent – not knowing how things would go and for how long. After a year in living in the yurt – my father-in-law had passed. That following winter we transitioned into the old home while I was to work on finishing some things in the yurt – without us having to live with the work going on lol. My son had also lived in the yurt with us at that time. Anyhow, things got busy – Son is in high school – and well – I just lost focus on the yurt needs.

Now we may need the house to help out my other son for a few months – or possibly a year with his children. We need to free up some of the living space in the house by moving my wife and I into our future master suite. So, I have set every other project aside in pursuit of getting us back on track and moved into the yurt before year end. The current schedule has us possibly in by the end of October or the middle of November. This depends on a couple big projects (one of which is nearly complete.)

The initial push was the redoing of all the plumbing … from PVC/HPVC to PEX. This took me a few weeks and I finished up that about 2 weeks ago. I ran new lead lines into all the areas needed and added new filters for the water. The last weekend and week I have been getting the tub in place and plumbed in. This week I have been finishing up some basic wiring and installing a vent and second light. The tub and bathroom finishing has been one of the big things to finish. With the current pace of progress going – the bathroom will be done by the end of this week.

The next big part that needs to happen will be the wall that I put in the separate my sons bed area from the rest of the living space has to come out. That area will transition into our kitchenette area. My son is a senior in high school – so he will keep his bedroom in the old manufactured home until he decides to do something else after he completes school. The plan all along was that this wall would come out. I kinda had a plan to make it easy to pull out. But that was a couple years ago – now I will find out how those plans work out. I will start pulling out that wall this weekend.

Ok, That is the current yurt work – more of that will continue over the next couple months – so gaming hobby stuff will be light for awhile. 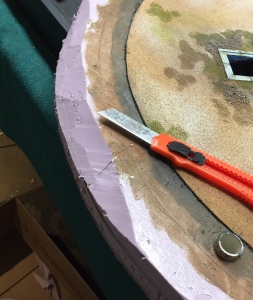 BUT, I did get a chance to wrap up most of the work on the Arena Rex project. I spent some time with my razor knife and carved out a decent looking rock / cliff mound.

I then gave the whole thing a good coating of black paint as a base followed by a couple dry-brushed layers of grey to white. After that, I put in more clumps of grass.

I am “done for now” on this. All that is left is adding in some skulls and skeletons around and in the pits. I also plan to add some shields around the inside wall as well. There are plenty of shields in the skeleton kits for doing this. 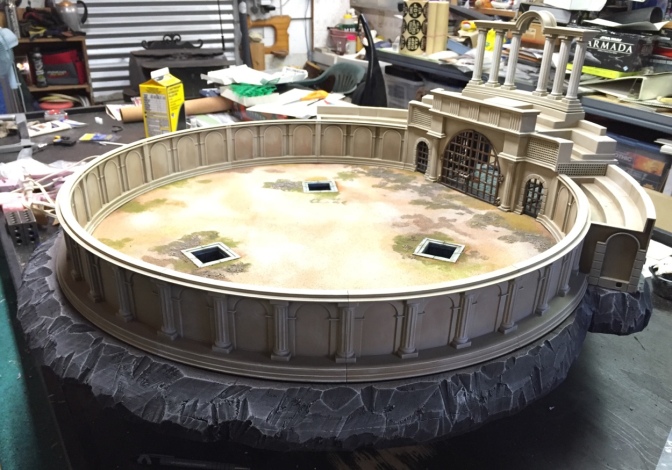 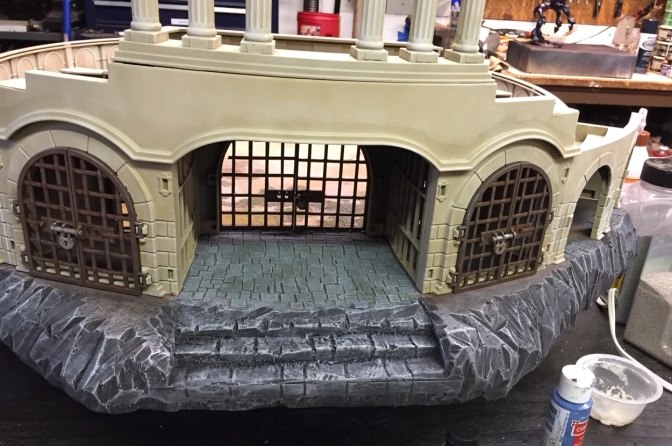 Other than the arena – I got some primer on the Bright Stallion project. 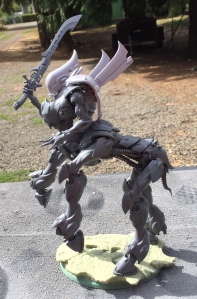 I also gave it a coat of color shifting red-blue-violet paint similar to what I had done on my first Revenant Titan. I plan to do some masking off of parts of this – but I needed it to get down first.