The “Dog-Days of Summer” are upon me… well they kinda have been most of this summer in the PNW. I’ve been having a hard time getting anything done do to the unrelenting heat that this summer has been. Sure, it isn’t as hot as some places in the world. But for us tender rain raised folks in the northwest corner of the United States – well its to darn hot and dry. Wildfires are sparking almost daily. My heart goes out to those south of my location in northern the California fire areas. And I keep a close eye on the fires in my own backyard. Remember to be safe everyone… and stay hydrated.

I’ve started to come to a few conclusions about my hobby. These are not new of course, as a hobbyist it always seems that I am adjusting and tweaking my thinking and direction within the hobby-sphere. But as I get older, I have recognized that I really enjoy my hobby… just the habit of modeling, painting and planning. Playing games is great… but it seems that I get few opportunities to just play without lots of extra effort.

To get more gaming in, I have started to join in on more leagues in my area for games I am wanting to play. Most recently, I joined a escalation league for 40k at the GW store near my workplace. I have been hoping for a “replacement” to my game club. Something closer to my commute and something easy to get to. Also, something that will fit my schedule so I can keep my weekends free at home. So far, I have played 2 games of the escalation league and it was a good experience. It is a clean shop and the GW shop guy is helpful and knowledgeable. I am looking forward to continuing to play at the shop – with a Kill Team league seemingly ready to start soon as well.

The pace of GW and other gaming releases has really become a problem for my time and wallet lol. Another conclusion that I have come to open my eyes and mind too. I simply will not have time to play all of this stuff, regardless of the funds I spend to “buy-in”. I have found that I have great initial energy to want to play the new editions of things, these new releases all look awesome and of course thats marketing, and it is doing what they want in the sales aspect. As an older gamer, whom now has more funds that I did when I was a young gamer – it has been hard to resist that next release pre-order. Harder than I want to admit I guess. As it stands, I love the idea of the new Titanticus releases. I absolutely loved EPIC 40,000 and have several of the older editions. I have several armies for EPIC… and I love to play it. But, again I have not played EPIC is maybe a decade? Seriously, I want to dive into this new Titanicus release… But I am refusing to do it. Not until I really get a handle on my gaming hobby.

That is the conclusions I have been coming to… I really have to stop this insanity with jumping into the next new and shiny thing. Especially, with the GW release pace and Kickstarter pace of things. Necromunda, Kill-Team… I have picked up both of these over the last 6 months. I have yet to play either. Although the Kill-Team league starting up at the GW store will probably get me into that sooner than I will play Necromunda. I had purchased the Bloodbowl release last year, I did play in a BloodBowl league in the past at the game club maybe 2 years ago. But so far I have no interest this year to break it open to play. Maybe I will play it in the future… I do like the minis and imagery (which tends to be the leading factor in my purchases).

The fact is that I love the minis and I really want to paint them. The issue is that I really don’t have the time to do all of it lol. I need to pair down my collection of games and mostly mini’s. I have just to much for games I have not played in years. I have more for projects for games I may never play. This autumn and winter I am planning to remodel my hobby area. When I do this I plan to organize and condense my hobby. Focusing first on games I play, then on games I want to play and lastly, on things that are more pie in the sky (would like to play). So until I get things organized in my hobby space, I am planning on closing the hobby budget and not making any big purchases of new / revised games. Supportive purchases should only be made to games I am actively playing. Otherwise, I think I will take a sabbatical from gaming hobby expansion lol. 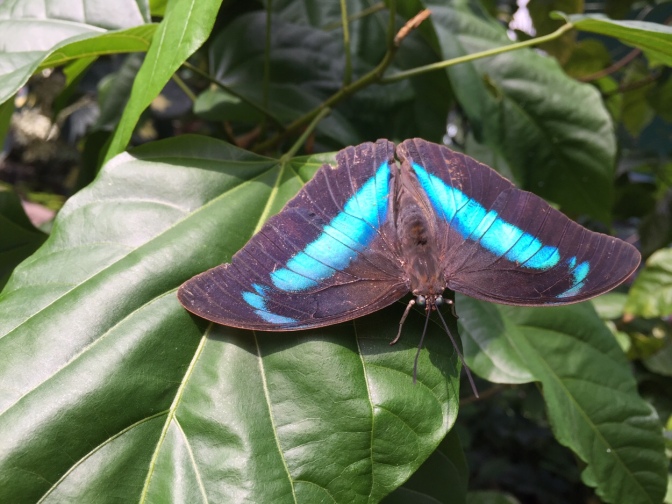 As I stated above, I did get a chance to play in a escalation league last week. An HQ of less than 8-PL and a Troop unit of 10-PL or less for the first round of the league. I am playing my Harlequins in this league as another reason to get them painted and on the table. I find these leagues really great for getting myself in motion on these projects.

I started putting together the new harlequins last week. With the new troops still in process, I choose to take some of my older Harlequins for this initial week of the league. 10 troupers and a Shadowseer were easy enough to gather and read up on playing. I have not played any harlequins in years and I have missed them so much. I am hoping to get a good handle on playing them again through this building / learning league.

I played both battles against a IG player at the local GW shop. He was a new player, so I tried to point out things for him to think about while setting up and getting into battle. I tried to stress – your IG do not want to be in hand to hand with the Harlequins. So stay back as long as you can – because harlequins hate to get shot. 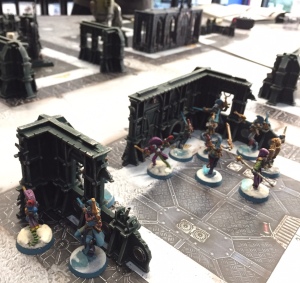 The first week mission was to control a com station… the longer you held it the more VP’s you would gain. Of course killing your opponents units gave you VP’s as well.

The first match I was planning to be pretty aggressive. To bound forward and take the objective – and force my opponent to come knock me off the objective. And when the IG closed in – I’d pounce on him. This took exactly 2 rounds of the game. I was on the objective at the end of my first turn (harlequins as fast). I sat on the objective and used my shadoweer’s powers to make my troops really hard to hit. The IG shot at my troop as they advanced – ready to push me off the com station. He closed and did kill 3 of my harlequin troupers.

In the next turn I pounced – shooting on my way in took out several of the guardsmen. Then I landed my assault and took out the remainder of the unit. Leaving only the Commissar left. My opponent decided to go for glory on his side of turn 2 and charged in with the commissar. I saved everything he had – and cut the commissar down in my returning swings. Game over.

The second game was much as the first. We rearranged the table – and redid our deployment type. But the results were about the same. This time I was a bit more cautious – trying to give my opponent a chance to get some VP’s by grabbing the objective first. But his advance was too slow. He did manage to get some shots off and drop a Harlequin. But then I advanced – around the objective and laying wait for his guard to get closer. 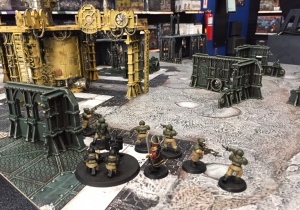 I managed to get twilight pathways to go off – and I got to move even closer… so I decided to just get on with it. I charged and cut down half of the guardsman. The next turn everyone consolidated and we re-ran the mix of melee. Again, the lone commissar was left standing his ground. We went into round 3 before I shot him down with 3 fusion pistols at minimal range.

Imperial Guard at this points level isn’t a threat. I am worried when they double their numbers while I only get 5 more guys lol… or my Starweaver lol. But it was fun to get to see what my harlequins can do… I spend the weekend working on my Starweaver and finishing up my new plastic troops.

I finished off my troupe unit by adding their heads. I then built the Death Jester I had in waiting to add to the group which I could then paint with he same schemes at the same time as I do the others. After that I started with building and base coloring the Starweaver. I would need this Starweaver for the next round of the league when I get to add one vehicle to my force.

I started off by premiering everything black – then adding a base coat of tan to everything that I thought would be wraith bone later. Then I used my gold and silver Sharpie pens to get some base colors for the metal down. I really like this technique with the sharpies – because it makes quick work when just wanting to get some base colors down. This is my first Starweaver to do for my harlequins. So I was really using this as a prototype to what the rest of the vehicles I have will look. 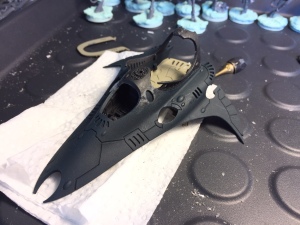 After basic dry fitting I was set to start the diamond patterning on the top of the skimmer. I decided I wanted to go with the lighter blue for my patterning. This was basically the same colors I used on my other Eldar army. Especially, the Hemlock. If I every used these in a larger battle together I wanted them to feel somewhat untied. The matching blue will be good for this. Using my masking tape, I cut out several diamonds and tried to get a decent spread of them over the front and down the sides. I stuck these on and then gave the Starweaver another coat of black along with some Dark Reaper from the top for a highlight.

After that was dry – I pulled of the masks and then proceeded to work on getting this skimmer done with all the base colors and sub-assembly. I have another week to get the driver painted so I can glue this together. After that I will start work on my other Starweavers, Skyweavers and Voidweavers. I will also begin work on getting the bases started on the new harlequins. I want to have the wraith bone ruins, with lighter green static grass and flower stalks. And as for the paint scheme on the Harlequins themselves, I am thinking I will try to keep them simple, maybe similar to the midnight masque scheme (red/blue/black) look with golds for weapons and do-dads.