Last Tuesday I played the 2nd game of this the 3rd cycle of our game clubs winter league (now early spring league?).

Anyhow, I modified my list pretty drastically this week – mostly just to try out a few things not made of wraith-bone.  This for the most part was a large chunk of what was my corsair list from a few years ago (OFCC list).  I just want to try a few new things now that I feel I have a pretty good handle on how things work in 8th ed.

My opponents list was part Imperial bunkers and part blood angel / death company I’m pretty sure.  Anyhow, I have not faced something like this army since starting back up in 8th.  And with  my remade list – it should be an interesting battle to see how my skills are going.

The table consisted of 5 objectives (league mission #2) – one in the center (on top of the big tower) and 2 in each of our deployment zones (turned out to be quarters).  I picked my zone – and won the roll to go first.  I had 3 falcons with 5 Dire Avengers each, my wraith knight w/ just a shield and sword (not sure why I did this), Wraithseer (always), eldrad and a unit of 10 wraith cannon wraith guard… and the Hemlock.

I did my best to minimize exposure to my opponents big death droopy unit of doom – and held eldrad and the wraith guard in the web way to react later to whatever turns up to be a need.

I charged forward to take on his character (dread guy… space wolf? … Bjorn I think).  Anyhow that turned out bad… as I missed the charge due to the ruins knocking off 2″.  I got a bit overeager.

The hemlock took out some of the scouts on top of the tower covering the primary objective… and I used my Dire Avengers to sit on my two objectives.  My opponent set his bunkers on his two objectives.  This would be a close match if the dice were fair.  Other than clearing out a few scout units – I didn’t do much the first turn except close distances. 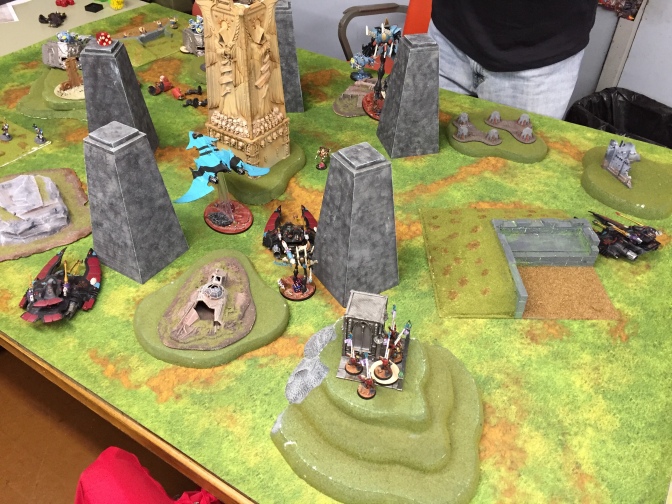 My opponents turn – let loose with the heavy guns from marines in the bunkers (lots of las) – and dropped his warlord from the sky (death guard company … Lemartes)… and more scouts came out of the woodwork lol. 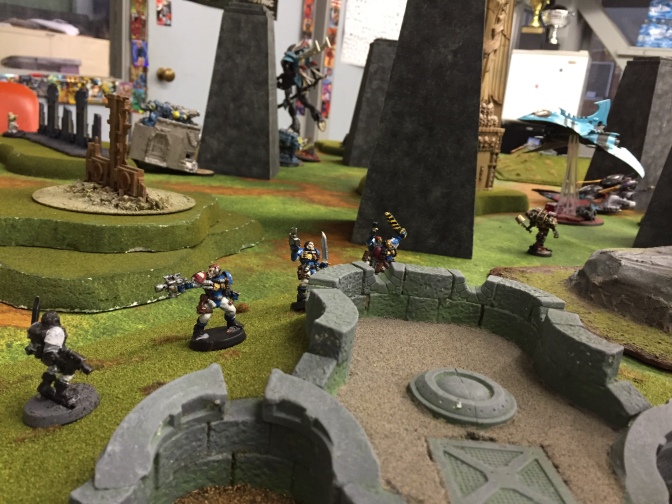 Bjorn laughing at my failed charge… and preparing to pounce on my wraith knight.

After Lemartes the rest of the gigantic jump squad of death arrived… scary.

They proceeded to shoot up my falcon and hemlock … and then assaulted both – taking down the hemlock is relative ease.  😦  The falcon faired a little better… but it was soon gone from the table as well.  Luckily I drop my Dire Avengers when I deployed… to cover one of my objectives lol.

On the other side of the table – After being pummeled by las fire – bjorn finished off my wraith knight.  That was a horrible round for the Eldar – but I felt like I had a chance – maybe if I could limit his big swing to one shot affairs.

I had held my wraith guard to counter this sorta thing – and I dropped them in to take care of Bjorn and possibly lend a hand on the other side of the primary objective when that was done.

Guided… and target Doomed by Eldrad – Bjorn was returned to the dust lol.

I zoomed forward with a Falcon and dropped another unit of Dire Avengers to try and lock down the primary objective.  They also let loose on those bloody flying marines with their guns.

The next 2 turns were pretty much a stalemate.  I cleared the deck of the jump pack marines – but I was down with nearly all my big hitters.  I moved in with my Wraithseer to try and take care of Lemartes before he got to my Dire Avengers. 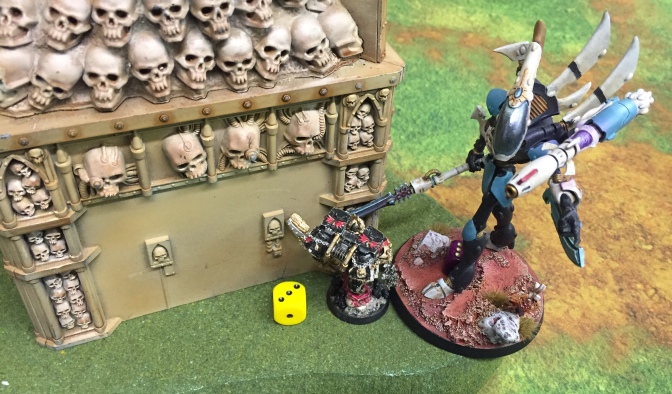 The Wraithseer did pretty poorly on my damaging of Lemartes… knocking him to only one wound – but should have easily killed him.  In the next turn Lemartes scooted around the other side of the central tower… avoiding the HTH with the Wraithseer.

The Wraithseer took heavy damage from snipers the same round – left on one wound left going into my turn.

Meanwhile my falcons fired long range to take out those darn snipers… and the wraith seer took out the scouts with her D-cannon.  She then rounded the tower to beat down Lemartes before she was dead herself. 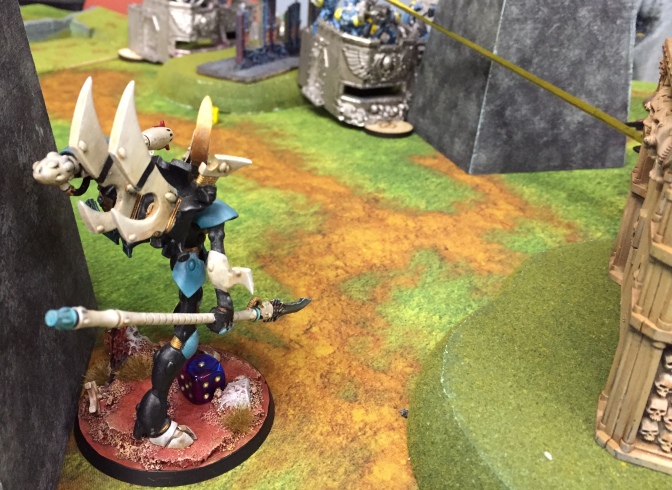 She took out Lemartes with a good couple hits – but then was taken down in the following round of shooting. It was worth it.  🙂

In the last round… the marines ran from their bunkers to try and dislodge my Dire Avengers whom were covering the primary objective – which was also the tiebreaker in the game.  They came up short on their charges… and I won a very close game – just barely.

I learned that I knew how to play to the objectives lol… I lost pretty much the core of my army and I held on for 3 turns and still got a win – fighting back to a draw just on victory points in the last turn.  I am the “T” in the accounting below lol.

Overall, a fun game and I learned quite a bit.  I plan to make another adjustment to my list before the next game (maybe) and I am not sure what I will do for the last pod cycle.