Well I finally got in another game of 40k this week.  It has been awhile and part of that was a delay in when we got our new pairings.  It was too late last week to get my games scheduled for normal game nights.  So, I skipped a week and took a break.

I had a scheduled a game for this week — but when I got down to the clubhouse my opponent had missed our confirmation emails — and forgotten his army.  So instead of going home at that point I got in a game against someone in the league that I had yet to play in any of the cycle pairings.  I will be playing him in the next cycle if the league lasts that long lol.  So the cycle and game number are kind of a question.  So this is sort of a make-up game in advance lol.

My opponent is a great guy with a bunch of Tyranids – most of which were painted really nicely.  It was nice to get some good “action shots” with my army with a great set of terrain.

He won the roll for deployment – and choose to come in from both sides… putting my Eldar in the middle.  The mission objectives, as shown above, ended up with two cards because of the “Twist”.  After we placed objectives (he then choose deployment zones).

We started deploying … I put my  wraith guard with the cannons in the web way – as well as the FW Wraithknight (Skathach).  I wanted to test out the web jumping ability of the Skathach for the next cycle – so this battle was actually a decent test for it.

The table from the nid’ end/s.  He also had to gigantic bugs with full units of other smaller nids’ which will tunnel their way onto the table … which I was not looking forward to. 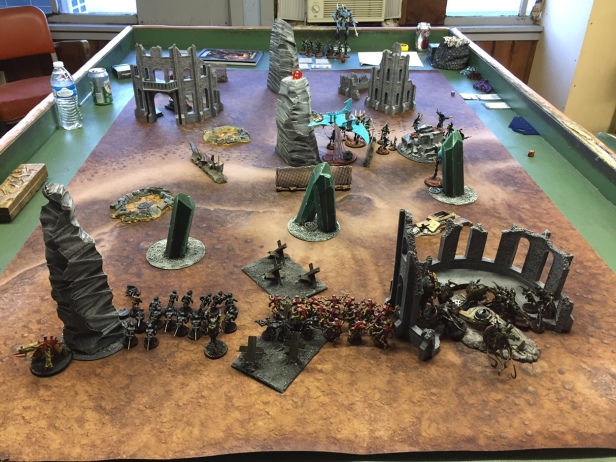 I set up best I could … in defensible positions in the middle zone.  But within reach of a couple of the objectives.

Now we roll off for whom goes first… and I get it!… I really needed to push out and gain some early space in this battle.  I push forward with my Hemlock and try to trim down his warlord (swarm-lord dude) and his guardians.

Throughout this game – I was plagued by low rolls for things like how many shots I get lol.  At one point I think I rolled 75% “2”‘s for over a full player turn lol.  These chances to really hamstring the nids’ just never worked out this game.  And it lead to a nail-biter of a match down to the end. 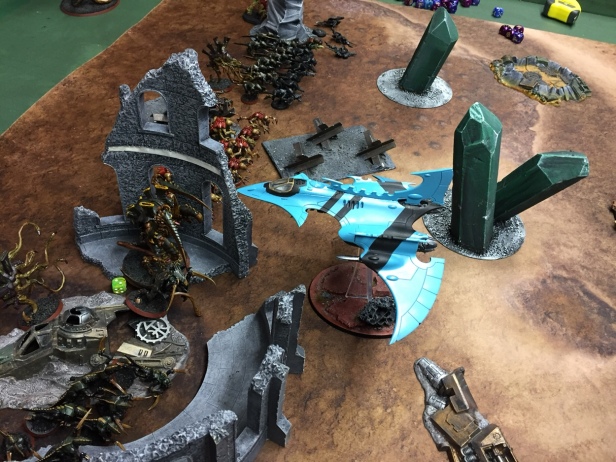 I spent most of my first turn getting into position to try and get lucky with objectives.  Other than that my goal was to try and take down all his big stuff – while limiting what things I lost.  Of course that wraith knight was going to be a liability in that respect. 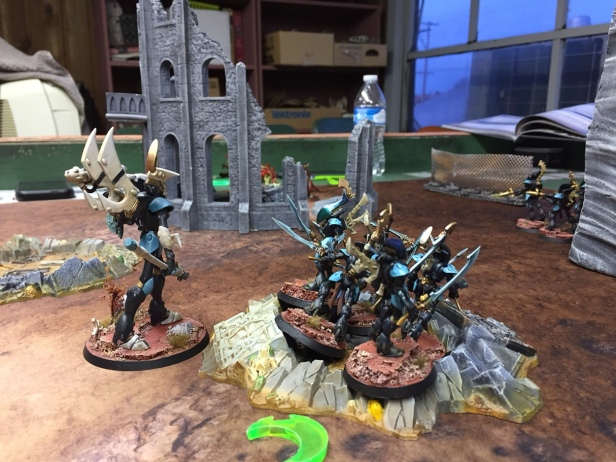 I finished these Wraithblades… I think they came out pretty well.  I will post up the painting progress in another blog post soon. 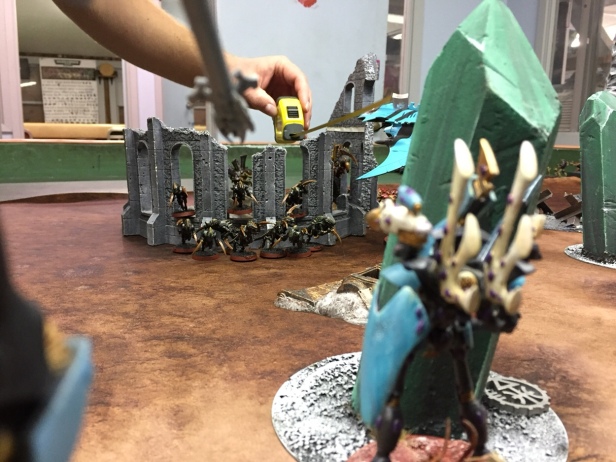 The wraith lord bears witness … the Nids start coming out of the ruins…  the horror of the swarm.  My opponents first turn… and the masses lurch forward to feed.

On my far rear flank… the twin Trygon and Termagants… burst out of the dirt… causing me to have to fight on both fronts. 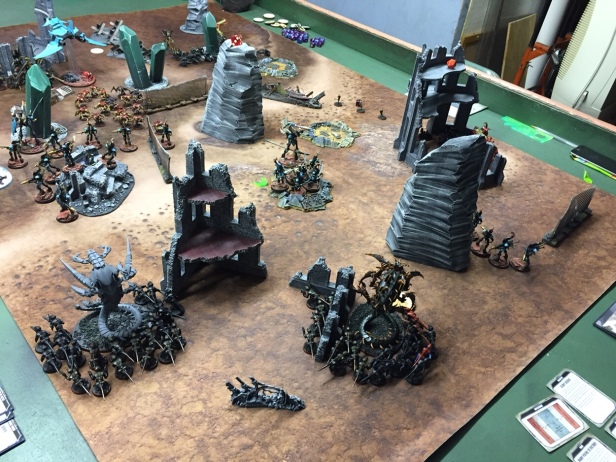 I used the “Forewarned” stratagem … and got a few wraith cannon shots at the rearmost Trygon… knocking it down by half its wounds (well worth the Command Point). 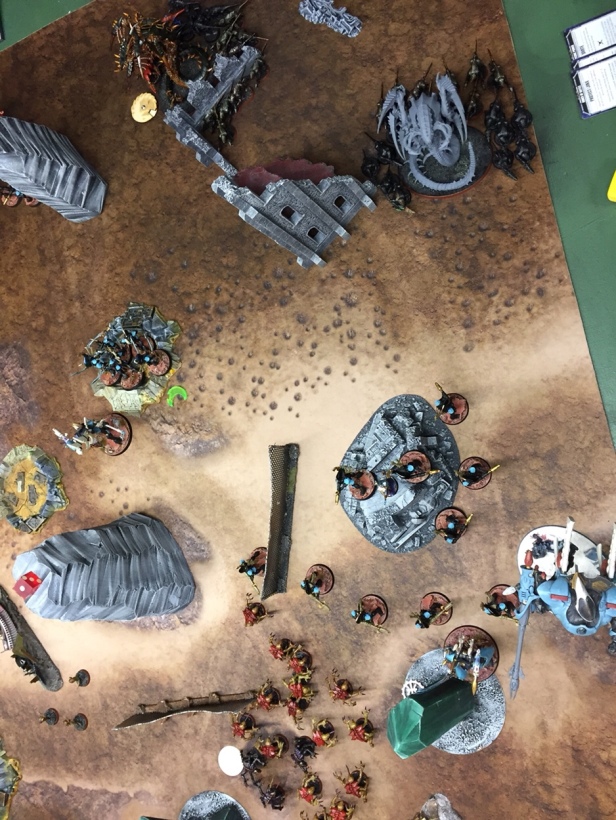 On my other flank… the Genestealers cometh to feed.  And the Swarmlord bounds forward as well.  The Nids’ slam into my wraithwall…

The wraith guard did a fair job of holding their line from the initial wave.  But the Nid’ Warlord made short work of my Wraithlord.  OUCH.

My next turn… (first turn no rolls revealed the Supply Cache) … so all of the objectives are still in play.

I swing my Hemlock around to get some more shots on the leadership of the Nid forces.

On the opposite side… my wraith guard (wraith cannon) troops finish off on the of the Trygons.  I was then caught in a moment of indecision… as I initially started moving my wraithblades to take on the Trygon… which then was killed by the wraith guard.  I lost a turn of movement with the ‘blades… I tried to charge the gaunts but failed.

I used my other wraith guard with cannons to do some more big nid trimming – but didn’t quite remove the other Trygon.  At this point my opponent was starting to get scared of my guns… and annoyed with how hard my wraithwall was to kill. 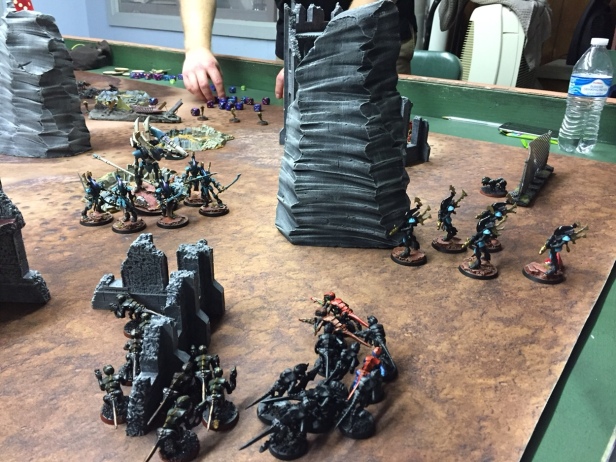 My Wraithknight just didn’t seem to catch a break with rolls to hit – and just ended up doing minimal damage on a gamble to cripple the still roaming Nid Warlord.

The Nid second turn… looking to feed on more wraith bone…  Having finished off one unit of wraith guard – the genestealers turn to assist in taking out the Wraithknight. 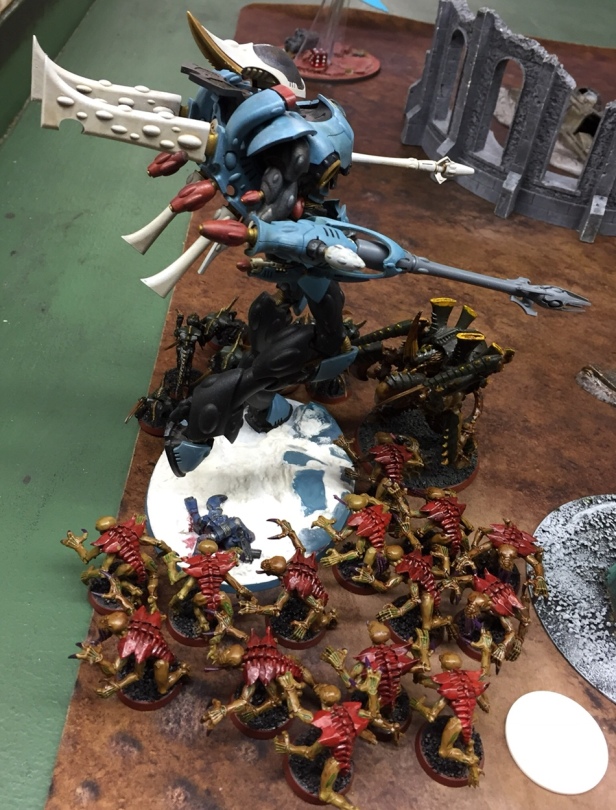 I was surprised … the wraith knight lived through the Nid assault… Just barely.  Trygon and gaunts charge… and take down a couple more wraith guard. 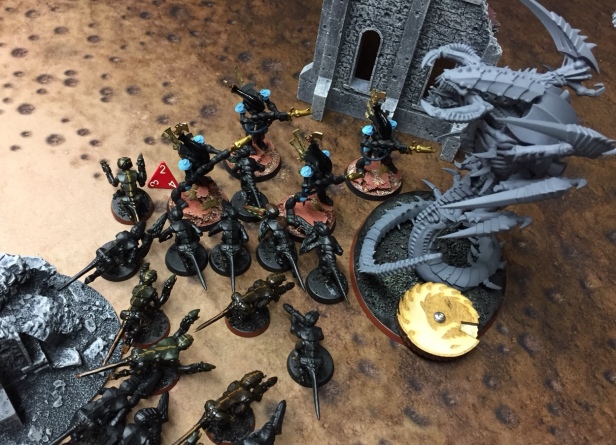 The wraith guard in the rear flank keep the gaunts at bay… soaking lots of hits with great saves. 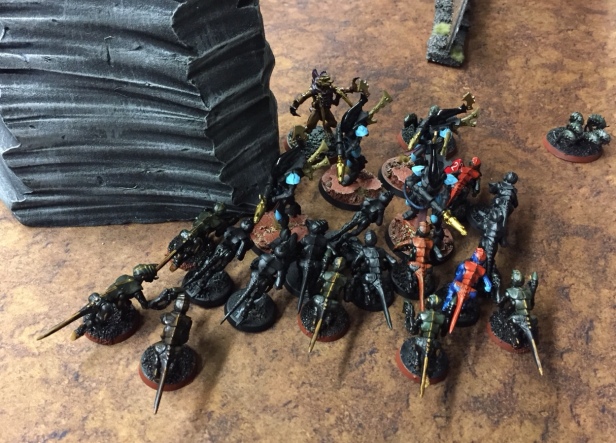 The wraith knight survives… again… but just nearly dead.  Makes a last ditch effort to get real wounds on the Nid Warlord…. and fails.  The hemlock follows suit… and manages minimal wounds on the warlord – just not enough.

The wraith blades charge into the ruins… and clean out the Nids guarding the objective within.

Top of the 4th round… I roll a “6” on the “Suppy Cache” objective… IT’S ON!  My Wraithseer prepares for the last stand.  With my Wraithknight gone… I will have a hard chance of winning this game.  But if I can hold the cache I could possibly get a draw. 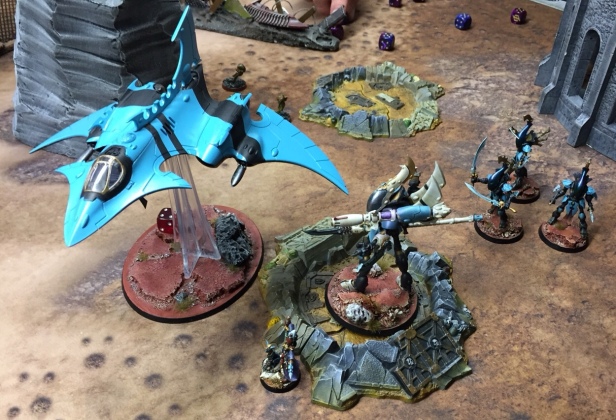 I drop everything back to try to ward off the Nid’ advance… everything is a speed bump a this point.  My two wraith guard units try to keep the Gaunts occupied… while the Wraithblades hurry to join in the defensive position.

Even the Spiritseer gets in the act. 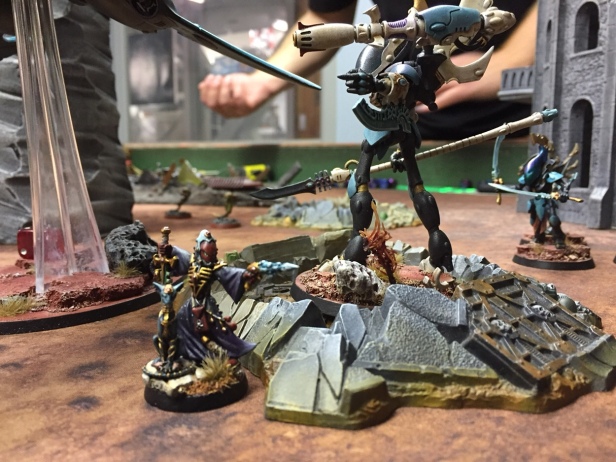 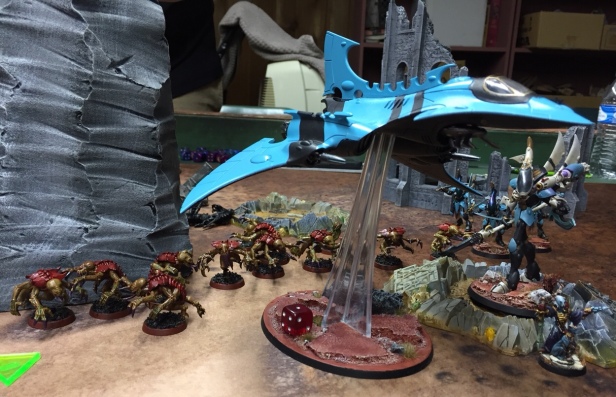 Soon the ‘stealers arrive… the hemlock is taken out by some shooting (from where I forget). 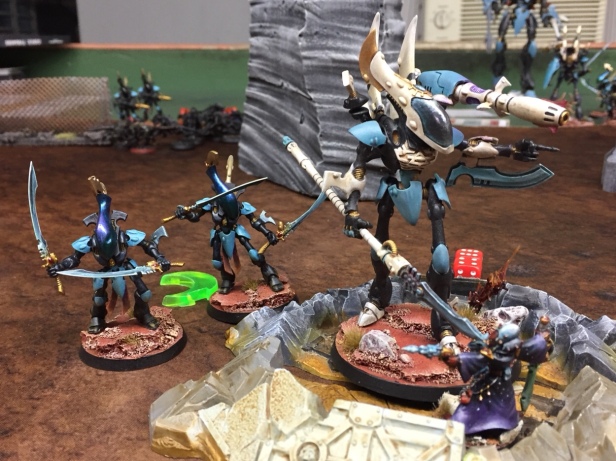 … and succeed!  with all hands on deck in the defense… we survive to round 5!  (the last round).  Everything I have stays in defensive positions – the wraith guard keep tying up the Gaunts… and the Nid’ advance continues. 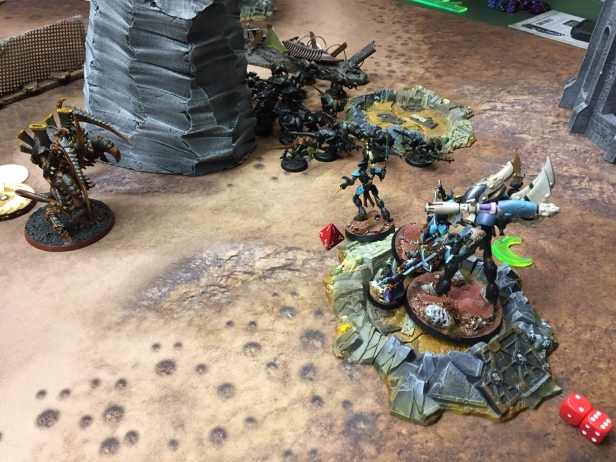 The Nid Warlord joins the showdown… toe-to…spiky tentacle… My spirit seer dives into the melee as well.

Then the flood of Gaunts … surround the valiant wraith bone constructs…

I put everything into taking out the Swarmlord… its all about honor at this point lol.  The wraith seer is cut down!… but with the Phoenix Gem… she ARISES from the ashes!  And takes out a few Gaunts as well lol.  The final act was my Spiritseer stabbing the Swarmlord in the eye!… killing it!  That felt good… a moral victory for sure.

In the end — based on both objective victory conditions… it is a Nid win.  The gaunt troops claim the Cache from under my Wraithseer (as I had no troops).  And the PL for killing stuff victory “Glory Seeker” also goes to the Nids as my Wraithknight was just too costly of a loss to overcome.

I feel like I got out of focus in the middle of the game on this one… and just got too spread out.  But it really came down to not loosing my wraith knight as far as the Glory Seeker objective went.  I had the warp shunt … but I never got into a good position to use it (I had to be 1″ away of an opponent at the start of my turn… which never happened).  I could have been positioned back and just shot at stuff – but those chargers of the Nids could just move so far.  I couldn’t keep them back.

Next time, I will probably go back to an sword knight – or no knight at all.  These wraith guard as so good at sticking around.  I probably don’t need the knight at all.  I did miss Eldrad though – I really could have used guide and doom lol.

Was a freakin’ awesome battle… even with the loss.