I’ve started the second cycle of our 40k pod league. My first match was against Orks… and it was a good game throughout.  We played out of our league packet for the mission… which was a Take and Hold mission – with 6 objectives spread evenly over the battlefield.

I knew I was going to have an issue with this mission — as my Eldar Wraith-Wall list is not built to hold and take multiple objectives.  So, starting out I knew I had a tall order to get this game.

I decided to bunker down in one corner – covering one of the objectives.  I knew from past games that I need to keep my forces from being taken out piece-meal.  I needed to keep them in pretty tough blocks.  I tried to get cover from the Ork big guns for my Wraithknight at the start – and placed the Bonesinger central to provide support if needed.

On the opposite side I started my Hemlock in a good spot to sweep in for support as well. I then placed my Wasp Warwalkers, Wraithguard (wraith cannons) and Eldrad off the table.  The war walkers would land from a cloud strike and the wraith guard and Eldrad would enter via web-way.

The Ork forces stacked pretty central to their deployment area… ready to flood forward and swamp me with boys. 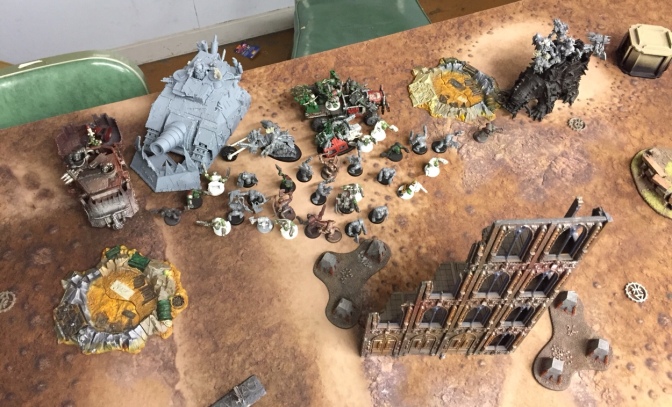 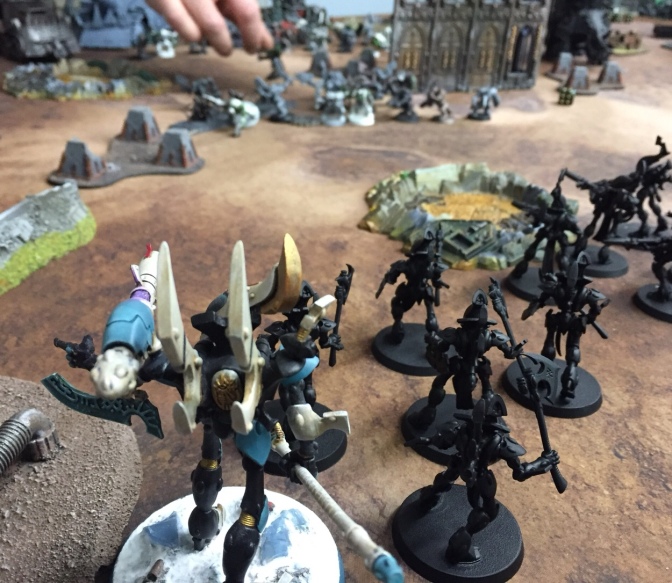 The large mob (30 boys with nobs) made a massive charge roll… and got into combat with my wraithguard on turn one…  The auto-hits from the D-scythes helped cut down the initial wave.  And my wraith guard  survived enough to hold the line.  It also helped that another unit of Orks failed their charge roll. 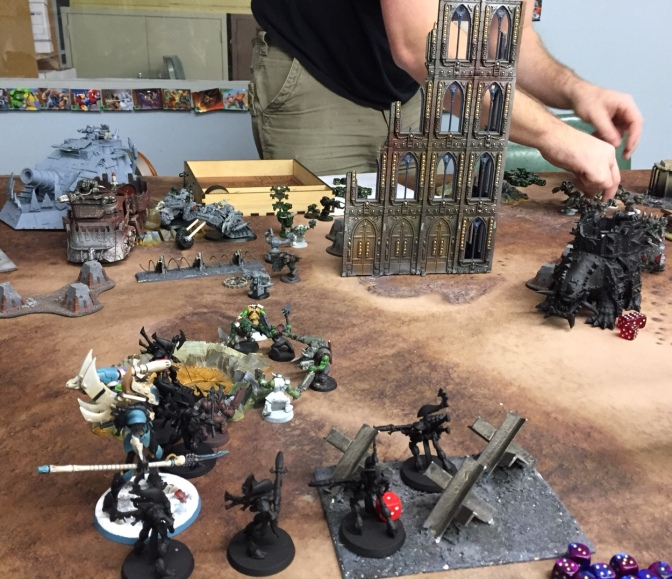 On my first turn I dropped my d-scythe wraithguard out of combat… and shot the Ork mass… my wraithseer and wraithblades closed in to work on cutting down more Orks in combat.

On the flank I dropped in my wasp war walkers, wraith guard with cannons and Eldrad to try and take care of the big tank (with big guns)… I Doomed and Guilded the wraith cannons …  and I managed to get some hull points off the big tank.

Things were still looking dicey… I needed to hold another turn to stem this green tide.

In my opponents turn his Big-mek rushed in to attack my wraith seer.  But again… another ork biker failed his charge – leaving the works attacking me piece-meal.  The wraith seer made short work on the big-mek.  The wraith blades still had their hands full with the large boyz mob – but they were holding. 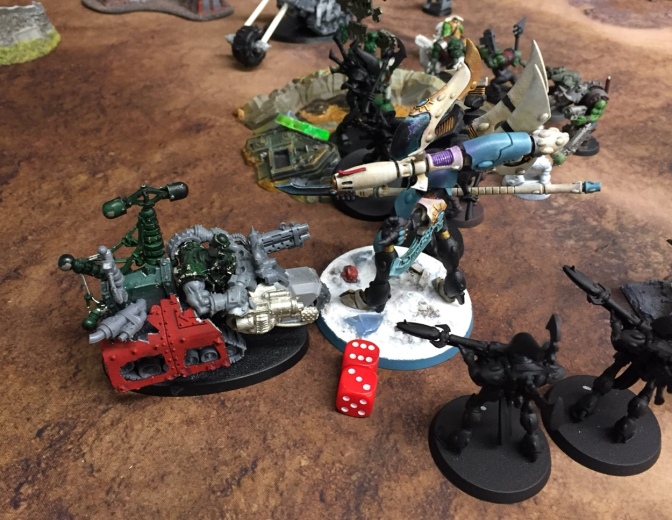 The Hemlock took shots at the Squigoth… and was attacked by a unit of rocket pack boys… which I cut down all but one in the overwatch.  Then I got lucky and killed the last in the assault.

By the third turn I was way behind in objective points.  But I had whittled down the ork forces really well.  I needed to make a push to table the orks – It was my only chance for victory.  Unfortunately, the game had a random game length – which could end the game after round 4.  The pressure was on.

The wraith seer, wraith guard and wraith blades kept cutting down the massive mob – and nobs that kept streaming in from the center of the table.  And meanwhile I moved forward with my wraith knight to take care of the trukks and tanks. 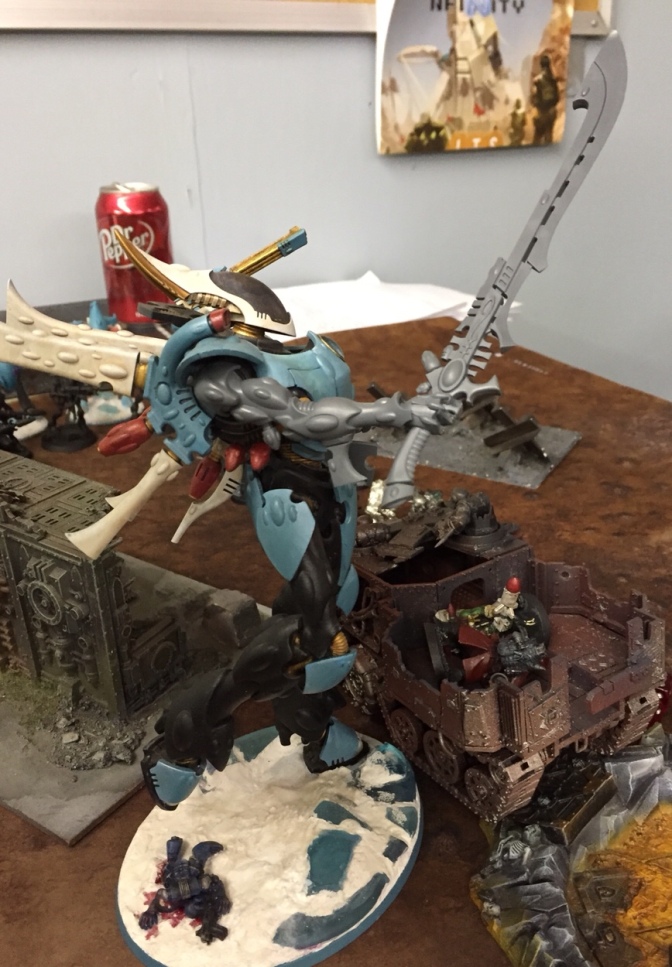 The wraith guard on the flank took out the big tank… and then assaulted the burnt’ boys who where inside.  Knowing I needed to table the Orks to win… I had no choice. 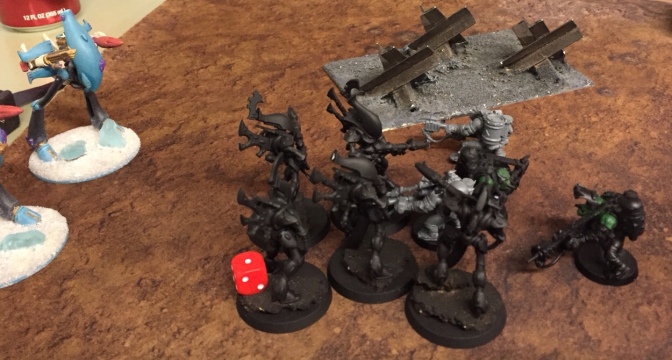 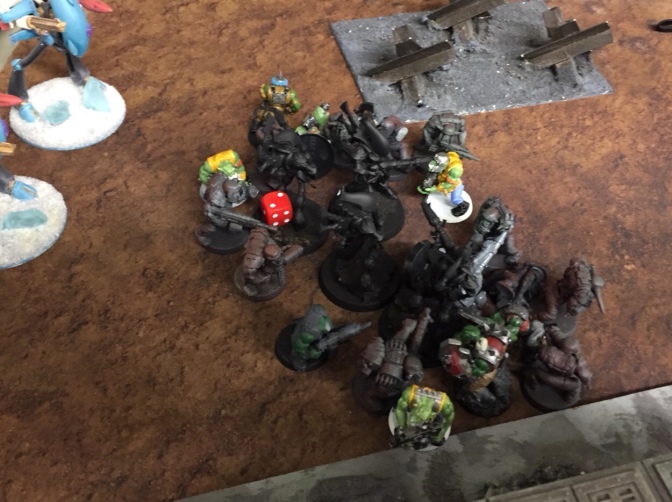 By the bottom of turn 4 I had cut down most all the Orks… even Eldrad got into the fray.  With one wound left… he battled on.  The wraith guard on the flank took care of the burna’ boys but were swamped by the boys in the trukk that the wraith knight cut up.

I flew my hemlock in position to Smite the last Ork on the far side of the table.  The wraith seer and wraith guard in the center took care of the boys and the squigoth.  Eldrad and the war walkers cut down all but 1 nob.  …

NO… the roll to end the game fails… the game continues for turn 5.

My opponent makes a fight of it… but I will easily finish clearing the table of the Orks… I win.

It was a fun game – and really featured what both of our forces were made to do.  The Orks needed to swamp me in boys… they needed to get off their charges to break me down.  I needed to survive the first couple turns to be able to counter things.