I’ve been GMing / DMing for ages – long before I jumped into miniature wargaming.  We were acting out our first “games” back in 7th grade… without books.  Later that christmas I finally got a red box basic Dungeons and Dragons set.  Followed closely by the blue box “Expert” set and the Gamma World box.  We played the heck out of these games.

Before too long I had the hard back “Advanced” AD&D books and a subscription to Dragon magazine.  By this time I was in high school – and joined the soon to be banished D&D club… 1983/84-ish.

For my group I was the DM most of the time… 75% or more of the time I would say.  I really enjoyed coming up with the world, acting out the interactions, and spoon feeding the players the action.  I bit hard on the DMing drug… and I have been the DM or as they call it later GM, ever since.  I collected and still collect different role playing games of all sorts.  And like most GMs out there… 80-90% of those games never get played lol.  I like thumbing through the rules and ideas in each system.  I have a hard time not picking up a cool looking idea lol.

Over the past few years I have started GMing my group with Star Wars Edge of the Empire (from FFG).  We have three GM’s in the group and we trade off that role.  On top of this I tend to shift gears when I GM… I will flip from D&D (3.5, 5e) to Star Wars, to something else lol.  So the story and what has happened sometimes gets lost in our aging brains.  Especially Star Wars I was really feeling the need to remember details of past story arcs and plans for the future.  I had solved this issue when we started D&D 5e because I switched to just running published adventures… with whomever happened to show that session.  Players can be missing and we will just play without them.  I called this the “old school” plan.  Because this was typically how we ran things back in the D&D club days… not knowing whom would show up.  If the player didn’t make it that session – their character simply because “lost” or missing from the party for that session.  Only to show back up when the player came back the following session or later.

Anyhow, as I get older I found that it is harder to juggle of the gaming stuff in my head.  Sharing space with work, parenting, spouse and other “real world” stuff was hard to keep track of what happened in last years session of Star Wars… “did you kill or capture that space pirate on Tatooine? and what about his ship?”  As a GM if I wanted to have a rival come back from last year I needed to remember if they were dead or alive lol.  I keep notes – but sometimes things get busy and things get forgot.

Some point last year I listened to the “Order 66” podcast … some old archive episodes where they mention this GM Holocron idea.  And that got me motivated to research this idea more.  I had a couple false starts … but a few youtube and blog articles later I came up with this… 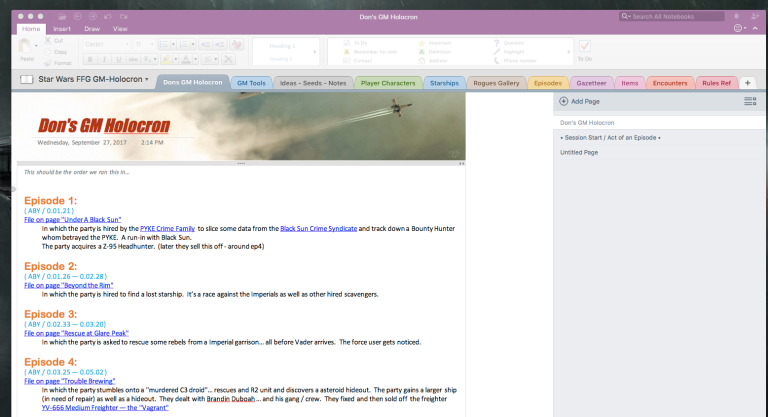 I settled on OneNote for a couple reasons.  First, I could use it on my Mac workstation, I could use it on my devices as well.  And I could of course use it on a PC if I ever needed to do that.  Along with that… I could share and back things up on the cloud. Meaning my PC using players – could access it as well.

I can lock down areas of the notebook – which keeps nosey players out of my plans lol.  I can also gather and paste things into this book for referencing in game while we play.

I installed OneNote on my workstation (at work) … and I can access my notes when things are not busy or on breaks.  When things were especially slow at work I organize and compile plans for the future.  I have had enough time to add in rules references for my players as well.  I also have a section for their characters – along with a pdf copy of their record sheet.

 Everything can be linked to other things – inside the notebook on OneNote or the web as well.  I am finding that this is an awesome way for me as a GM to be organized and have things at my fingertips during games.

I have a galactic map which I can see where the players have been – and think about where they may go.  I keep track of their time – so I can sync them up with the Star Wars timeline.  We started our campaign in line with the destruction of the first death star (Star Wars – A New Hope (ep4)).  So I know what big things are happening in the galaxy… so rumors and news can be timely when we play.

I could go on and on about my Holocron,  It has been a huge advantage for me as a GM.  I have a backlog of plans for another 4 or more story arcs – easily enough for a couple years of gaming (we only play every other week).  Whenever a spark of an idea hits me, I jump into my area on OneNote and jot some quick notes down.  I may find a map online that I like at a later point and paste it in there.  I find images that fit the idea as well … and again I add them to it.  Soon I am looking through my seeds of ideas and I can toss things together for new episode arcs depending on where my players are going.

Last things and first things … the biggest thing that I do to keep things going with my Holocron is a short check list.  This is a vital start of session and end of session note taking task which takes maybe 10 minutes.  At the start of each session I start with making sure the players have spent experience points (if they can).  This is mainly to curtail the players from trying to do this mid session – or trying to drag things out at the end of my time block for the gaming session.  We do it before we start – and I allow them to do it between sessions.  They just need to recap what they did.  The next thing we do is heal up any wounds from last session…. resolve strain and anything else lingering from last session.

After the maintenance portion of the start of the session we spend some time with a quick “Flash Back” or recap of the last session.  I will read from my end of session notes and recap what is going on.  The players will also recap what they remember.  This is a good step to get my notes right – as well as making sure everyone is on the same page.  After the recap I make my roll to check the group obligation… if something pops up I take a look at my Holocron to see what I can work in.  After that we roll up the destiny pool and start playing.

At the end of the session we hit the wrap up check list…  Starting with awarding XP – depending on how things went I will then determine obligation changes or additions for each player.  After that if there is time we have a short Q&A if the players have any questions or clarifications.  I then spend a few minutes writing down my notes and a recap from the session.  Typically this is an organizing and compiling of the notes I took during the session.  I make special note of any plot movement – rivals or other NPC things.  If the adventure dealt with an obligation – I take not about how that went and how that changes things for the future.  If any particular NPC needs to be updated or created I not that down as well.

I just want my notes to be clear and concise.  I will flesh everything out later after I have time to do so.  With all that I am done … I pack up my stuff and go about my normal adult life for the next week or so.  a few days before the next session I go back and review my notes and start planning for what may happen next session.

This isn’t everything I do to prepare – but in a nutshell this is the core of my process as a GM these days.  OneNote has been a key tool for my GM Holocron… but it isn’t the only tool for building it.  I found many applications and formats for building a GM Holocron – and I am sure there are many I didn’t look into.  Point here is, it isn’t what you use … it is how you use it to make your GM life easier.