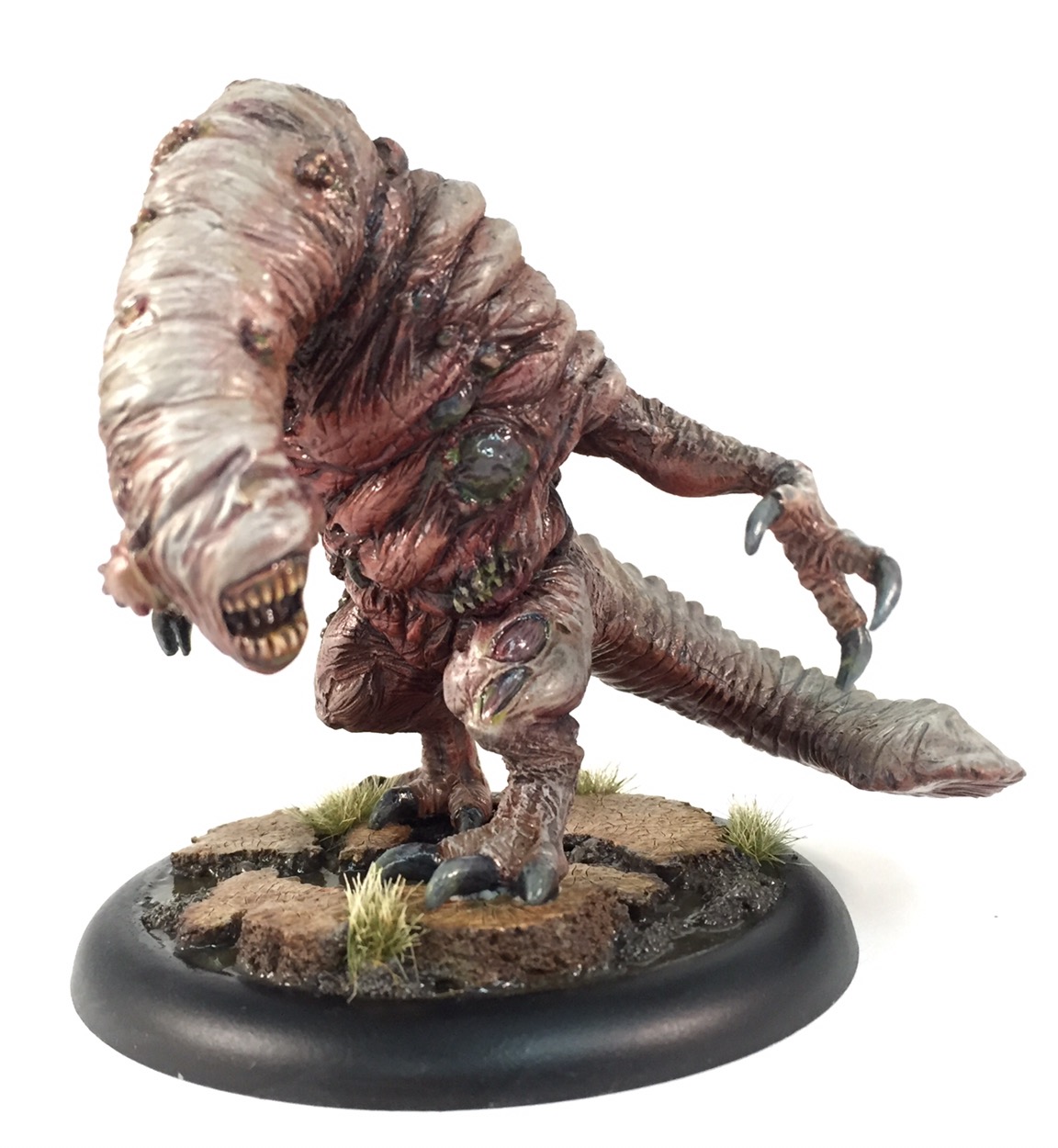 This was a fun painting experience. One of those that you almost feel like to piece almost painted itself.

I’ve been asked a few times to try and run down how I go about achieving this “fleshy” look. It’s the same basic look that I achieved on the Brood-Hounds earlier this year. I tried to remember what I had done with those – but it was kind of a blur to me. This sometimes happens when I get lost in painting – not thinking about what I’m doing to get there.

I decided that this time I would take better care about my process on the flesh look. This time I stopped at each paint change – all but a couple steps at the very end I managed to collect.

Here we go – warning this will be photo heavy…

The kit I had received is an all resin model.  I’ve worked with larger resin models in the past – as with those – wash and clean them before you primer and glue it up.

Next up – I drilled and pinned the foot – cleaned up mold lines that I spotted and sanded/filed down other irregularities. 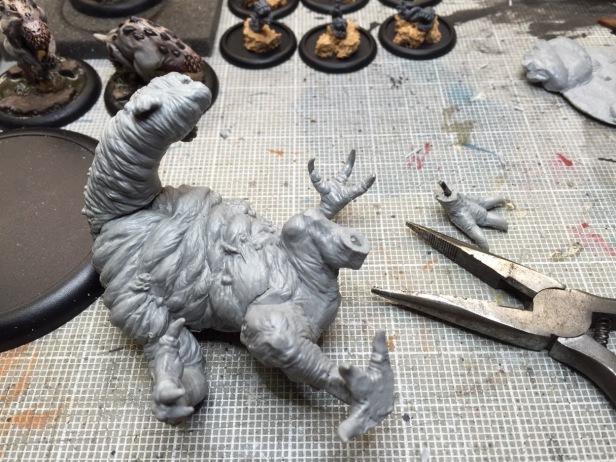 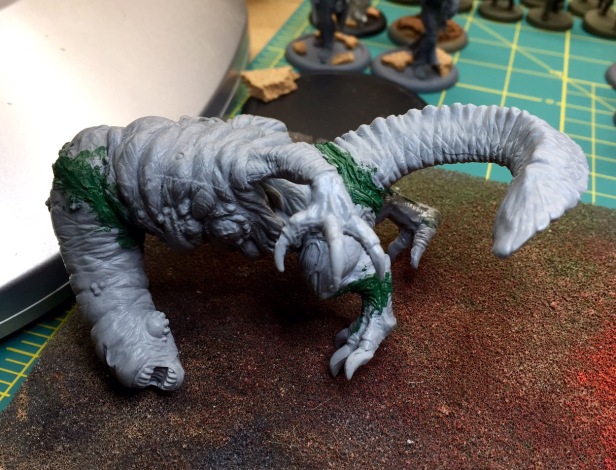 I then added my first layer of green stuff (using GWs liquid green stuff) into all the cracks and places I had to attach the parts of the kit (foot, head, tail, body). 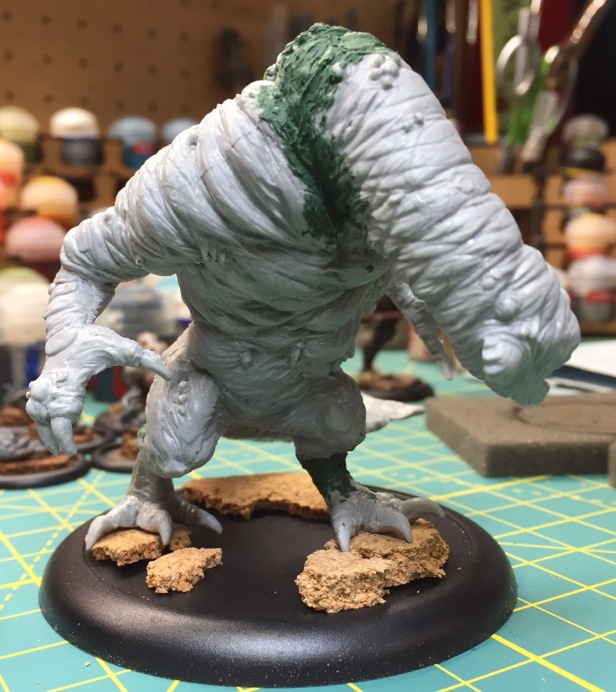 After the first layer of green stuff was dry – I applied more to detail the joints – smoothing the connecting parts and trying to make the look seamless.  This included making sure wrinkles continue thru from one part to another – as well as not interrupting the boils and other things.

Next came primer. I used a krylon grey – as I have done with all my Brood figures.

– in this case – after the primer I went back and did a bit more clean up work – sanding and trimming. Sometimes it is just easier to see things after I get the coat of primer on. – after the quick clean up I hit the model with a short spray of primer to touch up my work.
—-

On to my painting process.  I did this over one weekend – mostly one day.

I started with a heavy dry-brushing of the top/back of the Howler with GW’s “Rakarth Flesh” – I wanted some of the darker tone of the primer to be apparent within the deeper wrinkles.  I’m thinking about the layers and quality of the flesh – looking at my own skin – things are built in layers – things under the skin will give a sort of translucent feel to the top layers. This needs to be thought about at the very beginning.

When complete with this initial a layer of paint only the back of the Howler will have paint – the underside should still be grey primer.

While the back is drying I moved onto the underbelly. The underbelly should be all of the tender sides of the legs, arms, tail, neck as well as the belly itself. 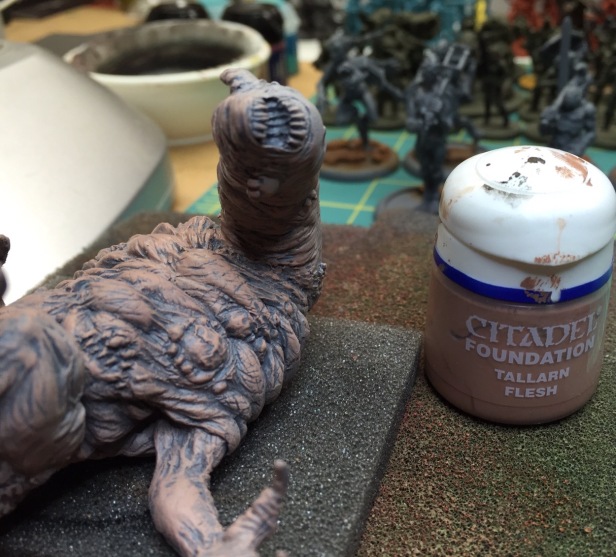 I applied a nice dry brush of GWs “Tallarn Flesh” as a base to the underbelly.  Again, letting the deeper wrinkles reveal the darker grey of the primer.

At this point you should have the Rakarth Flesh  on the top/back and the Tallarn Flesh on the underbelly with darker grey tones in the deeper wrinkles and a slight overlapping dry brushing blend where the two colors meet at the sides.

Next I dry brushed the back/top with GWs “Agellan Earth”.  This is part of building layers into the skin for me. It’s not as light as the Rakarth Flesh – but it’s not much darker really either.  This just sort of gives a bit more depth.

Now we start the washes…or “shades” as GW likes to call them <eye roll>.  Traditionally this is kinda like a glaze. I learned it as called a “wash”.  In a nutshell – your using a thin color to tint another color painted below it. Your building depth within your painting… To this end your hoping to give the skin some depth and translucence.

Starting out on the underbelly – I applied a layer of GWs “Reikland Flesh – Shade”.

The entire underbelly – including neck, arms and legs undersides. I was sure to get this liberal wash into all the recesses / deep wrinkles. 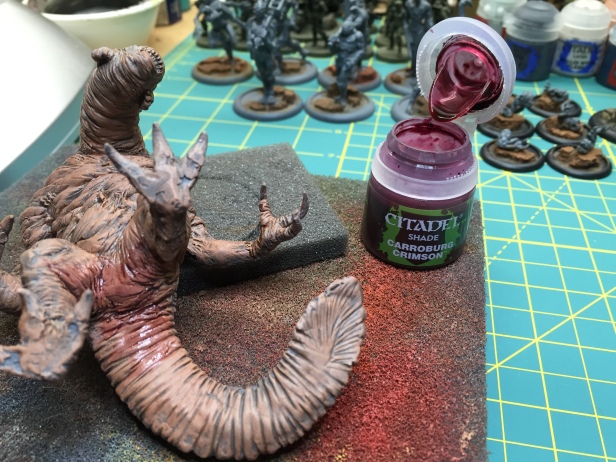 Next up is another wash to the underbelly – this time with GWs “Carroburg Crimson – Shade”. This will build with the colors underneath – creating more depth to the flesh. 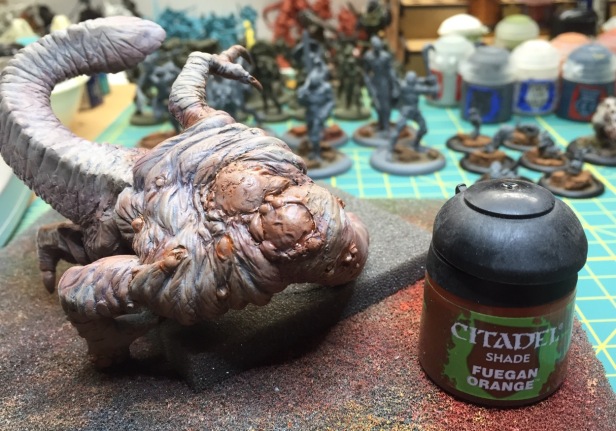 Going to the back – I added a quick wash of GWs “Fuegan Orange” to all of the sores and things on the Howler. I let this bleed slightly outside of the sores and bumps to help later with the inflamed or irritated look.

– back to the underbelly – with GWs “Ogryn Flesh”. Again this is to help with the depth of the underbelly skin. This wash is completely over the other layers. It will help tie things together as well as just make it all warmer and richer.

Ok – things should be looking pretty good. Be sure to let things dry between layers of wash. Pay close attention to the sides where all of these colors meet. The darker / redder colors of the underbelly should stay to the deep wrinkles around the sides and slowly transform to the lighter and dryer colors of the back/top.

On the back I now add some of GWs “Gryphonne Sepia”. This wash is treated to the details of the wrinkles as well as the edges of the sores and boil like things on the Howler.

Pay close attention to keeping the edges feathering to the non- shaded areas and around towards the underbelly. I am using this wash to help blend and finish things on the back.

On the underbelly I’m adding a similar unifying was of GWs “Nuln Oil”. Keep this mostly to darkening the deep wrinkles – and the other interesting features.  I’m using multiple layers of this wash to help define overlapping body parts – (i.e. Where the legs and arms overlap the main body).

On the back and elsewhere I’m adding some of GWs “Typhus Corrosion” to add some puss like slime to the lower edges of sores as well as other over moist areas. I add a light dot of this to every boil top – to help with a translucent puss filled boil feel. 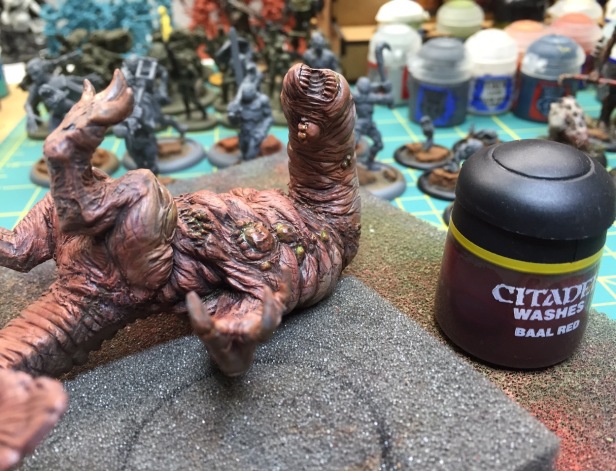 On the underbelly I add another layer of “Baal Red”. Again – this is for depth – I keep this layer mostly to the wrinkly areas. I feel that this over the Nuln oil really helps for the warm fleshy feel of this look.

While I’ve been working on the Howler and between drying time I worked on the base. I’ll go into these bases another time maybe. 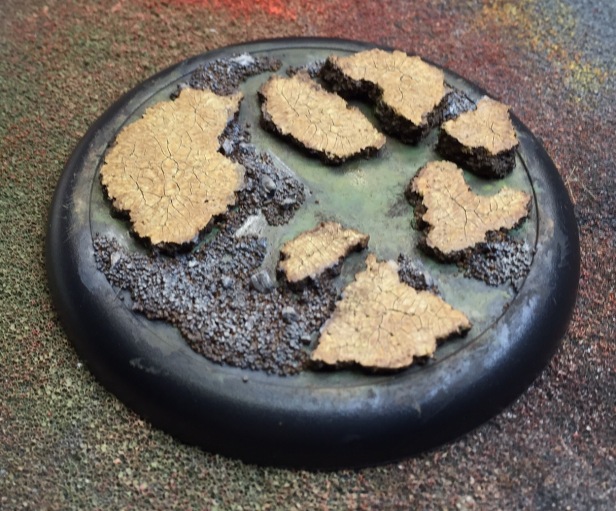 It’s just a few layers of cork – some rocky grit and paint. I paint the tops of the cork with crackle paint then reprint it to a dirty dried mud look after it dries. I paint the rest then I glue on some grass clumps and fill with dirty resin water. This time I placed to grasses away from the main water areas to prevent earlier issues.

Ok – this is where I stopped logging in every step with a photo. But I’m nearly done.

First I went and painted all the claws with a series of dark grey – giving them. All a nice claw like look. After a couple washes of sepia and crimson I added a lighter grey highlight.

I painted the teeth and detailed the maw. I at this point decided on some thinned grey to the larger round scar like details on the Howlers back – to better fit with the look on the Brood hounds. 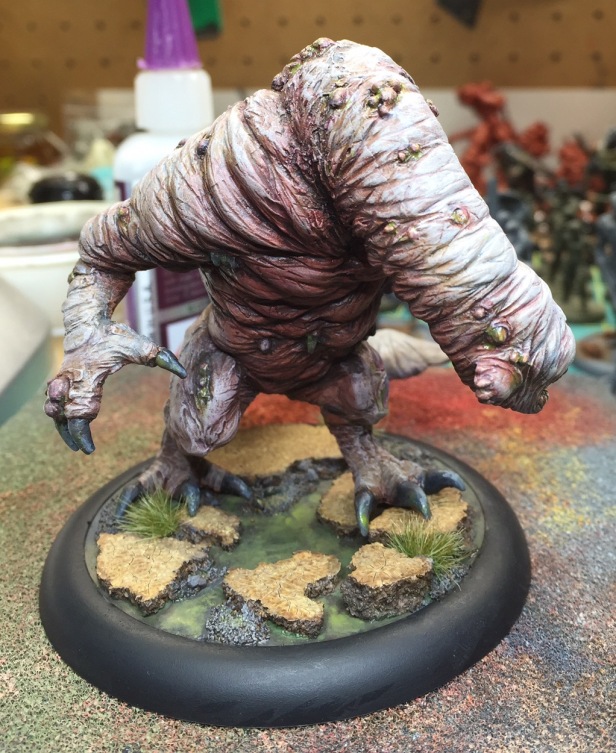 I then went the back to my first couple steps … dry brushing … but much lighter.  A light dry brush of Rakarth Flesh over the back … With an even lighter dry brush of GWs “Pallid Wych Flesh”. I also used some of the pallid flesh and a detail brush to pull out some additional highlights around the neck and head.

After adding the water and a flat/matte coat I went back to gloss coat the water – and all the scars, boils and other moist/wet areas on the Howler.

After that it’s just a few details to “taste” – just where I felt it was needed. 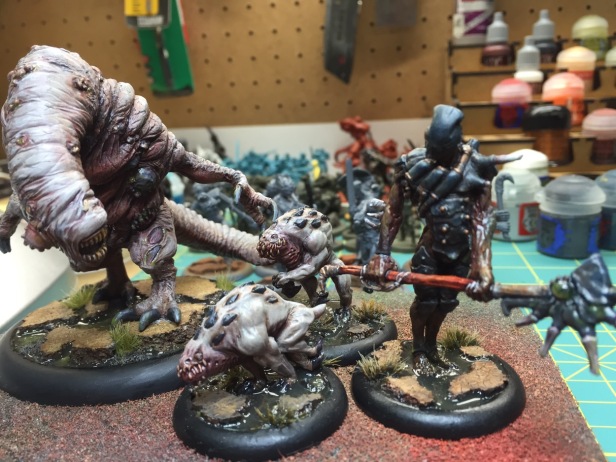 That’s about it. If there are any questions just pop them into the comments section with this post.