Last night I got in my 4th week of blood bowl. This weeks opponent was a human team named Dragonis Ignis.

The goblins were short one Troll this week due to injury. I decided it would be best to receive the ball the first half and do my best to slow the game down.

All things went according to plan – I held the ball till turn 4. And was slowly moving it forward. When my ball handler got knocked down and the ball went flying.

After that I did my best to stall the human push towards the goal line. I kept them out till the last turn of the first half. – then the cracks in the gobbo formations started to show.  After the first half – it was 0-1 in favor of Ingas. 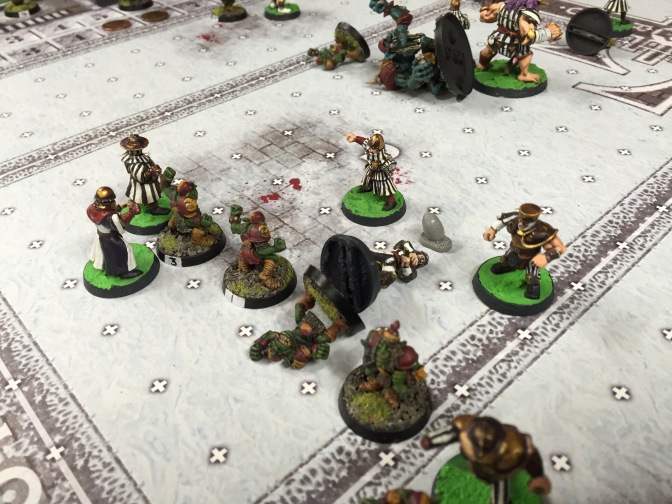 In the second half I kicked off – trying to keep up my defense – but the losses of goblins was starting to mount.  Being without the 2nd troll was stretching the limits of the team. 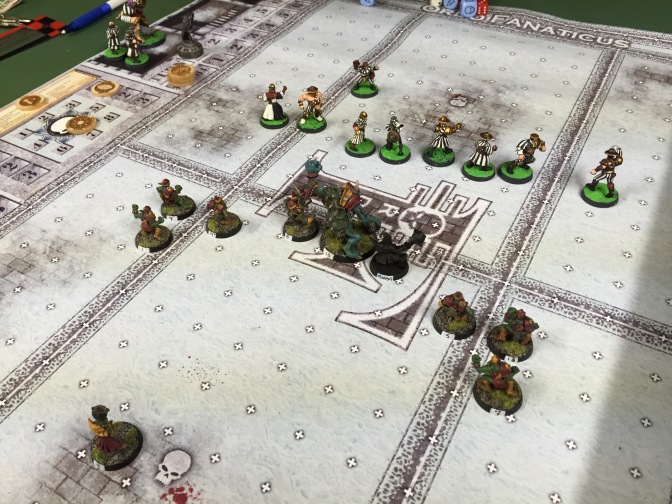 The humans scored again and I received the kick again – this time my pogoer did his best to move the ball up the pitch. – but he was not fast or agile enough to keep away from those blitzes.  In time he was again tackled – and the ball scattered.

The humans recovered and even with some errant passes – they scored again before the end of the match.  The gobbos had one last try to get a score. – But in the end the tired troll fell asleep and wouldn’t get up to try a goblin toss. The game ended as another loss 0-3.

One sad moment – the first goblin team player “Bobby-B”  – the hero of week 1.  Was crushed into the turf.  His remains will be honored in a private brawl TBA.  The human blitzer whom did the deed will have a prize on his head.