Ok – first week of the league is in the books for my goblin team “TöeJam”. It was a fun game against some chaos dwarfs.

A hard played loss for the gobbo’s – but hey- no one died!  And only one permanent brain injury to a single goblin(who could tell).

Here are some shots of the game. 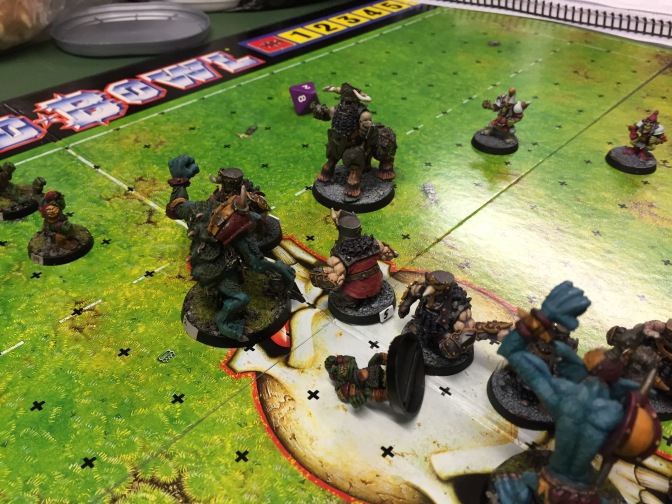 The first half was a pushing match – the goblins held their own – much to my surprise. But – late in the half a hobgoblin got through the scrum for the first score of the game.

On the ensuing kickoff … I did get a one possession score- via a thrown goblin FTW … er’ … The TouchDown. This happend at the end of the first half.

The goblins surround the ball… One picks it up and hands it off to the gobbo next to the Troll ( waiting to either toss or eat the goblin).

The hand off is fumbled — the goblin fans hold their breath as the ball bounces around. As luck would have it… The ball scatters first to the troll – whom can’t seem to grab it. Then the ball scatters back to the intended goblin whom gets his hands around it this second time!

Success!  1) the Troll is paying attention and not dumb this turn. 2) the Troll picks up the goblin and decides NOT to eat the tasty goblin. 3) the Troll tosses the goblin over the chaos dwarf defenders.- successfully. 4) the goblin lands without dropping the ball. 5) the goblin runs – with an extra push (successfully) in for the score!

The crowd goes wild!  And on the ensuing kick off they riot! And rush the field. In the end of the half its a draw. 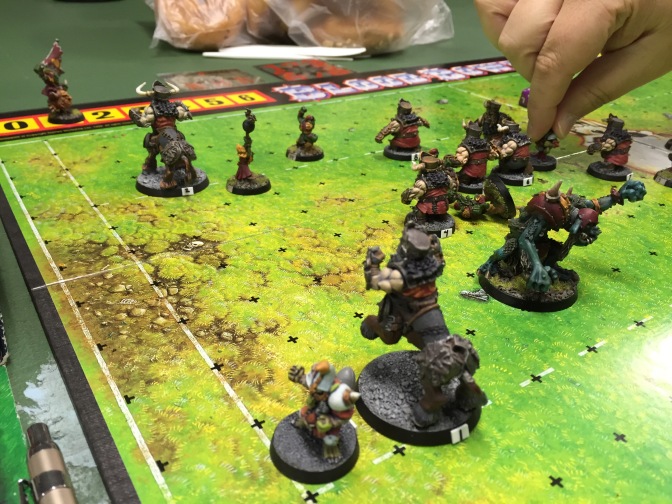 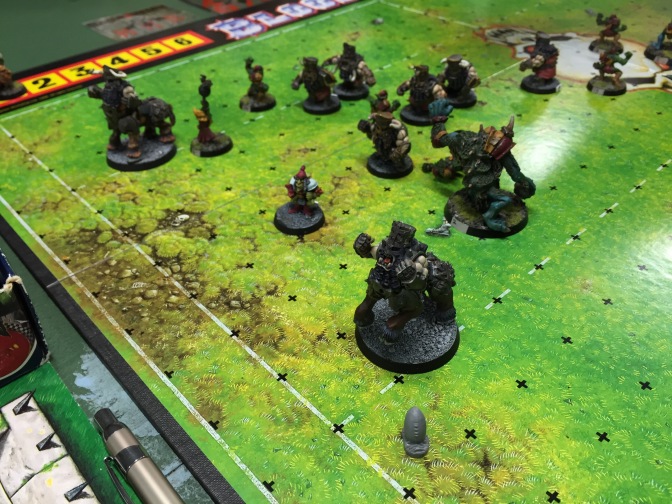 The second half is more scrum time – with a late score by the chaos dwarf team.  My bomber did delay the score – but not long enough.

With only two turns to score the goblins attempt to repeat the first half magic / but no luck. The first Troll was dumb – and the second attempt the Troll tried to eat the goblin – whom survived by hastily jumping out of the Trolls gapeing mouth… Dropping the ball in the process.

– looking forward to next week!